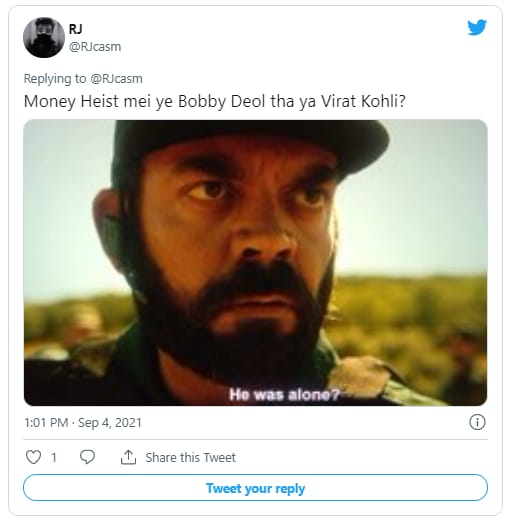 Money Heist fans in India have flooded social media with memes after they spotted an actor in season five who looks a lot like Virat Kohli and Bobby Deol.

In the first of five episodes released on Friday, Money Heist fans sat on the edge of their seats watching a group of officials attempt to capture Marseille, who was trying to escape in a military helicopter. After landing, he disappeared before officials showed up.

An officer, who was interrogating a farmer standing near the site, reminded fans of Bobby and Virat. One fan tweeted, “Bobby Deol finally got his #MoneyHeist break.” Another joked, “Virat Kohli veiled in #MoneyHeist”.

Some even joked that the actor was the son of Bobby and Virat. One fan wrote, “If only Bobby Deol and Virat Kohli had a baby.”

Money Heist Season 5 has been split into two volumes. While the first volume was released on Friday, the second part will be shown on December 3. In the first five episodes of the volume, Money Heist addresses some popular theories.

One of the most popular theories revolves around the pregnancy of Alicia Sierra. While many fans assumed she was faking her pregnancy, the new season not only debunked the theory but also showed her giving birth to her daughter with the help of the professor.

The new season also introduced Berlin’s son Raphael, played by Patrick Criado. An engineer by profession, Money Heist Season 5 showcased his first heist with his father and hinted at a possible betrayal in the making.

However, fans have yet to come to terms with Tokyo’s death. The final episode showed the series’ tallest character, sacrificing herself to protect her team, and reliving memories of a horrific death in Berlin in Season 2.