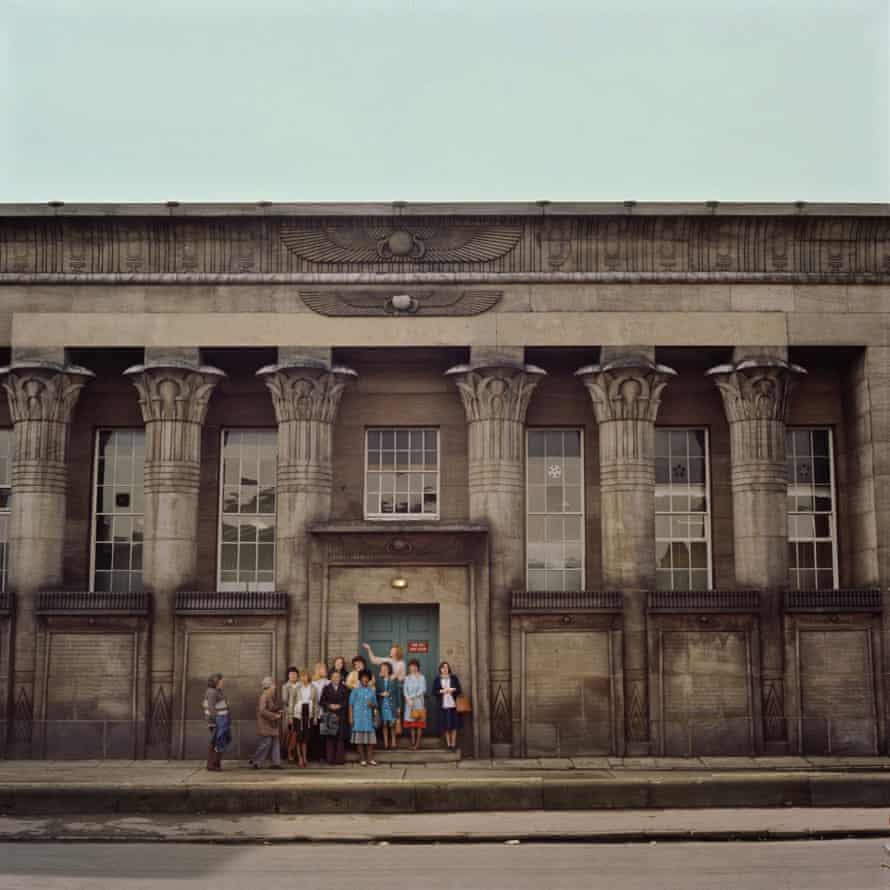 me he moved to Leeds in the early 1970s and has been photographing its dying buildings and the people associated with them ever since, taking notes and observations to accompany each subject. This image appeared at the Impressions Gallery in York in 1979, as part of an exhibition I called A new rebuttal of the Viking 4 space mission.

In the exhibit, each photograph was bordered with a coordinate grid like those used by NASA and mounted in a tin frame painted bright red. I wanted to give the impression that the Viking probes to Mars, which had been launched a few years earlier, had returned to Earth and now its rovers were rolling through the streets of Britain taking pictures. The sample shots were largely from Leeds, but I also included photographs taken in London and Sheffield, as well as NASA images of the surface of Mars.

I pitched this idea to the gallery director, Val Williams, and she was very encouraging. However, I got a lot of sticks when the exhibition opened. I worked primarily in color, and at the time documentary photography was mostly limited to black and white. There were also objections to the way he had framed the photographs. But a few years ago, the revived show was brought to Arleswhere a bomb fell.

‘What are you doing?’ they shouted. ‘Taking a picture of the cinema,’ I yelled at him. ‘Why?’ they replied ‘He left’

I had seen this scene on a beautiful bright day when I felt the urge to walk through Leeds, heading south towards the coal mining areas of Beeston and Hunslet. I was on my way to a small church whose former vicar had been the Reverend Charles Jenkinsonan unconditional champion of Quarry Hill Flats, the mighty art deco estate built in the center of Leeds. I spent five years documenting its decline and demolition.

I was hoping for stained glass or even a mural from the 1930s as a tribute to the man, but found nothing in the church. Across the street, however, was a huge movie theater, the Tivoli, which by then doubled as a bingo hall. The front was pretty wasted, but the back was a winner. The two ladies were chatting but, as if to avoid the streetlight, or perhaps to take a breather with their purchases, they suddenly stopped and looked at me with my hasselbladwaiting for them to continue.

“What are you doing?” they shouted. “I’m taking a picture of the cinema,” I yelled at him. “Why? He left.” “Because I love how it is.” And they left. Whenever the painting appeared in exhibitions, the caption was always: “Two anonymous ladies, leeds1976.”

Fast forward to earlier this year. Rudi, my agent, gets an email from Gloria England. She had seen the picture in Instagram. The two ladies in the photograph were her mother Doreen and her friend Sonia returning from work. At that time, Viking images had been collected in a book, which Rudi sent to Gloria. He immediately returned with the revelation that I had also photographed the mill where Doreen and Sonia worked, and that the couple appeared in the book twice.

For me, photography is about coincidences. Marshall’s Linen Factory, also known as Temple Works and later Kays Mail Order Warehouse, was the finest building in Leeds, a colossal Egyptian stone temple built in 1840 and employing hundreds, perhaps thousands, of young women. I photographed it in the late 1970s when everyone was finishing the night shift. One woman was waving to the others to line up and she could have been dancing like an Egyptian. To get the whole facade, I had to go back to the dreary depths of the Co-op Funeral Home garage over the road and push aside a couple of hearses.

Last time I looked it was semi-abandoned, while the Tivoli was completely razed to the ground a few years ago. Doreen and Sonia had a happy life and were well known at Kays Warehouse, as they are now in the art world and in my archive. Photography it is the only insurance against death.