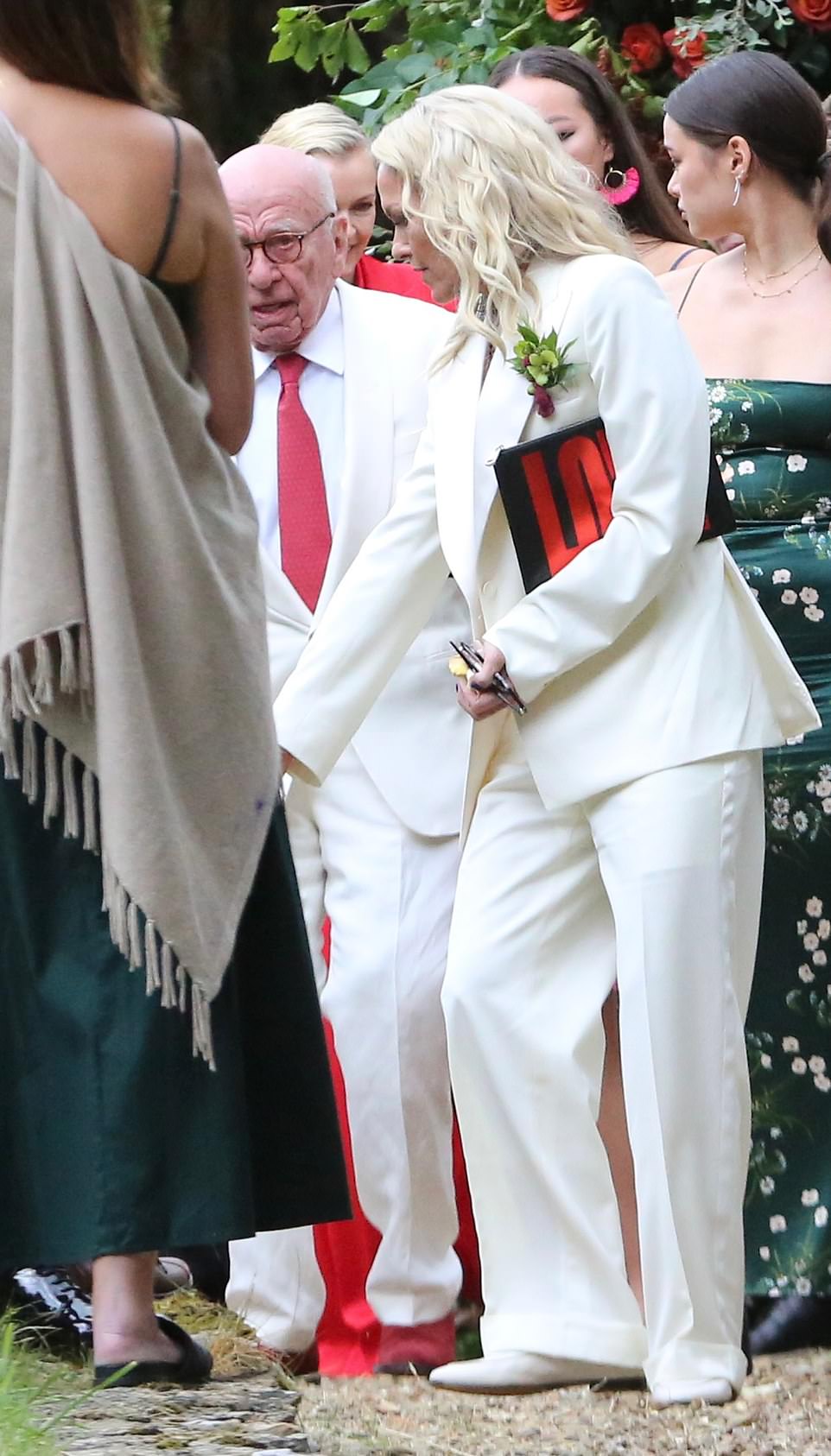 With his fourth divorce under way, you’d think a wedding would be the last place for Rupert Murdoch to forget his troubles.

But even as the ink dried on divorce papers filed by his estranged wife Jerry Hall in an LA court, the media tycoon was never going to miss his granddaughter Charlotte Freud’s big day.

In a striking white suit – matching one worn by the bride’s mother Elisabeth Murdoch – and red suede shoes, the billionaire mingled happily with 70 guests celebrating Charlotte’s marriage to rapper Luke Storey at a quiet Cotswold church yesterday, in scenes reminiscent of Succession, the blockbuster TV drama about a media dynasty.

If he was concerned by Ms Hall’s claim for ‘spousal support’, Mr Murdoch, whose wealth is estimated at £14 billion, certainly didn’t show it. Escorted to a Range Rover by Elisabeth, the 91-year-old smiled and nodded as he headed off for a family reception and party.

Rupert Murdoch and daughter Elizabeth Murdoch at today’s wedding between his granddaughter Charlotte Freud and her new husband, Luke Storey

Newlyweds Charlotte Freud and Lukey Storey tie the knot at St Mary’s Church in Burford, smiling as they leave the ceremony

Charlotte gazes at her new husband, Luke after they married today at a church in Burford

The couple smile at one another after making their commitment inside the church. Charlotte wears layered necklaces and hoop earrings as part of her bridal look

Their car has the letters C&L on the windows, celebrating their marriage today

Groom Luke wears a red shirt with a purple tie and blue suit, with a pink rose boutonnière to match Charlotte’s bouquet

Charlotte’s train was covered in yellow, pink and cream petals as she left the church this afternoon

Ms Hall’s petition claims their marriage broke down through irreconcilable differences. Reports suggested she blames the Murdoch children for wrongly believing she had tried to cut their ties with him.

Two of them, Elisabeth and younger son James, joined their father at the colourful ceremony in a Norman church in the West Oxfordshire village of Westwell.

James, who left the board of the family business, News Corporation, in 2020 after a disagreement over content, arrived wearing a long collarless shirt or kurta, normally worn in South Asia.

His wife Kathryn and their three children were also among guests, along with Elisabeth’s third husband, artist Keith Tyson, and Strictly Come Dancing presenter Claudia Winkelman.

James Murdoch arrives at the wedding in a purple tunic, dark waistcoat and light trousers with his wife Kathryn Hufschmid

Elizabeth Murdoch, Charlotte’s mother, arrives at today’s wedding in the Cotswolds, with her husband Keith Tyson

Elizabeth Murdoch wears a cream suit and carries a clutch bag with love written in red lettering, as she arrives with her husband Keith Tyson

The mother of the bride, Elizabeth Murdoch, wears a red and green boutonnière on her cream suit

Charlotte’s father, Mathew Freud wears a burgundy suit as he makes his way into the church for his daughter’s wedding

Charlotte makes her way to the church, wearing a white appliqued dress, and holding a dark coloured bouquet

Guests leave the Burford churchyard after the ceremony, walking arm in arm down the path

Guests gather outside the front of the church, which is decorated in a floral display for the wedding ceremony

Guests stand in the churchyard, as the church entrance way is covered in a floral arch created for the celebrations

She is helped by bridesmaids carrying lighter coloured blooms, with last-minute details and adjustments to her veil

The bride, with sultry eye makeup and layered necklaces, lifts the skirt of her dress, showing off white platform shoes

A bridesmaid helps Charlotte with a tissue, as she prepares to head into the church and marry groom Luke

Charlotte smiles towards her bridal party as they arrive outside St Mary’s Church, and make their way into the building

The bridal party, wearing satin blue dresses, carry bouquets with pink and white blooms as they head to the church

Miss Freud, 21, who has launched a pop career using the name Tiarlie, arrived in a Bentley Continental convertible, driven to St Mary’s church by her father, the PR guru Matthew Freud.

After the 50-minute service guests were driven to a lavish reception on Elisabeth Murdoch’s estate nearby.

Both Mr Freud, 58 and Elisabeth, 53, have a reputation for throwing extravagant parties.

Residents of the picture-perfect village recently found their lanes patrolled by poker-faced security men while a small army of builders buzzed around a huge marquee at Elizabeth’s home.

Last month residents received hand-delivered letters advising them that there would be a ‘sizeable’ wedding reception with party music. One local joked: ‘They unfortunately forgot to include an invitation for us to go along. But at least they let us know and we can close the windows.’

Claudia Winkelman accessorises her all-black look with gold rings and a necklace, as she arrives at the wedding with Emma Freud

Guests arrive for the Cotswolds wedding today, with many wearing black or dark colours

A guest wearing a beige suit arrives at the wedding at St Mary’s Church, as more guests arrive at the venue

Guests make their way to the church for the wedding today, walking up the path towards St Mary’s

The bride, 22, who restyled herself as singer Tiarlie, got engaged to DJ Lukey Storey, 36, in July last year — three years after meeting at London private members club Laylow.

He popped the question while the pair were on holiday in Greece.

The couple, who both come from famous family dynasties, celebrated with an engagement party at Laylow, sharing black and white snaps of the occasion to Instagram.

The bride, who was raised by her PR guru father, Matthew Freud and Elisabeth Murdoch, the media mogul’s second daughter, has previously said that Luke was the inspiration behind kicking her ketamine drug habit.

Charlotte’s father, Matthew Freud, is the great-grandson of Sigmund Freud and nephew of Lucian Freud who founded esteemed PR film Freud Communications. He is worth an estimated £170million.

His first wife Caroline Hutton, with whom he shares two children, went on to marry the Earl Spencer, Diana, Princess of Wales’ brother.

Charlotte grew up in the UK, shifting between family homes in London and Suffolk, and is one of 13 grandchildren on the Murdoch side of her family through her mother, Elisabeth.

Luke’s mother is British artist and designer Helen Storey, whose father was award-winning novelist David Storey – who won the Booker Prize in 1976 for his novel Saville.

Charlotte, who has been open about her previous drug use, told Tatler last year that the the pair were both addicts when they met at the west London private members club – where Luke was DJ and Tiarlie was working as a hostess having dropped out of school.

She said the couple had an ‘immediate obsession’ with each other, but admitted ‘it was kind of a mad relationship, we were kind of just using buddies’.

When Luke joined a 12-step programme to tackle his addiction, the singer admitted she was devastated that he cut her out of her life because of her substance abuse.

Charlotte has long been a somewhat unexpected figure in her rich and privileged family.

Back in 2019, she told her Instagram followers her mother was worried about her fashion choices leading up to a family wedding. She said her mother even hired her a personal shopper to ensure the frock she chose wouldn’t show too much cleavage.

‘My grandma’s getting married, so mum’s sending me to a personal shopper to make sure I cover my t**s up for the ceremony,’ the then 18-year-old told her 6,548 followers.

She later shared some of the looks, with comments such as: ‘If I must look ridiculous in exchange for free champagne, so be it’ and ‘the s*** I do for this family, gawd.’