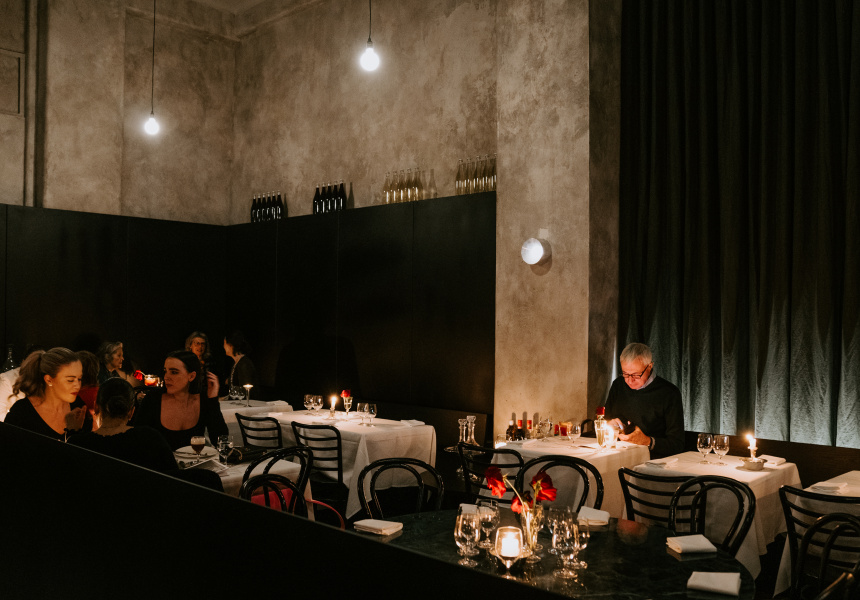 Melbourne loves a secret. And even though Cucina Povera Vino Vero is from Australian hospitality heavyweights and lifelong friends Maurice Terzini (of the iconic Sydney restaurant icebergs) and Joe Vargetto (of Melbourne’s White lord Y Dough), sneaking into his new Italian restaurant through an inconspicuous door on Little Collins Street feels like you’re in on a secret.

The former Massi space has been transformed by design studio Latitude into a minimalist yet elegant room. The walls look like big slabs of plastered concrete and floor-to-ceiling gray curtains cover the facade, making it feel like your own little bubble.

“The idea was always that you can’t buy style and you can’t buy authenticity,” says Terzini. bed sheet. “It’s not like Joe and I decided to go to Rome and then come back and open a Roman bar. This is very close to who we are; we’re reminiscing about our childhood memories and the brutalism of Italian garages and the brutalism of Italian gardens, all concrete, that’s the vibe.”

It is a homecoming for Terzini. He was born here and his first venue was Caffe e Cucina in South Yarra, followed by Il Bacaro and Melbourne Wine Room. The last one, Giuseppe, Arnaldo & Sons at Crown, closed nine years ago.

Regarded as one of Australia’s great restaurateurs, with a career spanning over 30 years, Terzini has created restaurants with a singularly sharp, almost punk vision. His success boils down to a simple concept: that the atmosphere and service should be as remarkable as the food, drinks, and beauty of the venue.

But for both him and Vargetto, there’s an added layer to the opening of this restaurant. It’s called Cucina Povera (which means “food of the poor”) and serves as a tribute to the Italian immigrants who came to Australia to make it their home. Your families. Everything on the menu is carefully considered to fit into that narrative. “It’s the story of my parents and Maurice’s parents coming to Australia.” Vargetto says. “My parents longed for a simple ricotta or some semolina or fennel flour or some oranges, which they couldn’t get in 1970s Australia. And that’s what the menu is all about.”

You won’t find prosciutto here, but what you will find is handmade bologna and salami along with vegetables that aren’t as ubiquitous in restaurants, like turnip greens and sorrel. Vargetto is making pork jowls, slowly braised with cinnamon and a few cloves, with parsnips and chestnuts. There is also kid with fagioli (beans); the meat is cooked slowly and slowly, then the bone is removed. Also, every hour, Vargetto comes out brandishing a large copper pot from which he pours freshly made ricotta into little serving bowls spooned into ciabatta. Warm and sweet, you haven’t had ricotta until you’ve tasted this.

The dessert is kept in a simple but excellent summary. Hay Cannoli from Footscray Pasticceria T Cavallaro & Sons, where Vargetto has flashbacks of trick-or-treating with his parents, and a dish called Half-Time Orange. To make it, Vargetto poaches oranges in sugar syrup for hours, then serves them quartered with his version of modica chocolate; it’s a rich, gritty mix of dark chocolate, brown sugar, and a little olive oil. “The halftime orange is basically [inspired by] me growing up and playing soccer, riding down to the oval on my bike myself at 12. It’s a quarter of an orange with chocolate on the side.”

But more than that, the restaurant taps into the family memories that are quintessential to many Italians. “Growing up, our garage was used more than the kitchen,” Vargetto says. “We had freezers, refrigerators and cupboards laying around…and Mom would put her pickles next to the Ford Falcon. She was always a hotbed of industry.”

Here, the drink is Terzini territory. “We have an absolutely great Bloody Mary,” he says. “Imagine it’s 12:00 pm, you’re in the city, you’re hungover, you need to get on a plane at 5:00 pm, you go in and have a Bloody Mary, some grilled bologna.” Perfect. He’s also serving a Negroni Sbagliato (also known as a “wrong” Negroni, which swaps the gin for prosecco). “In Milan it is served in a liter glass, which is so kitsch, so we went out and found [some]. It is anti-minimalism.”

As for wine, there are eight on the list from a rotating selection of producers, they come by the glass or pint. The first is Giorgio De Maria’s Fun Wines. “He is the god of Italian wine,” says Terzini. There’s also a 10-litre goon bag (“an ironic offering for thirsty people”). “We wanted the wine to be a lo-fi, breakable garage wine.”

And as for the vibe? “It’s a small room,” says Terzini. “Just come in and let yourself go.” But that’s not to say the experience will be impromptu: “The service will be like the Icebergs service, but for $50 instead of $250.”