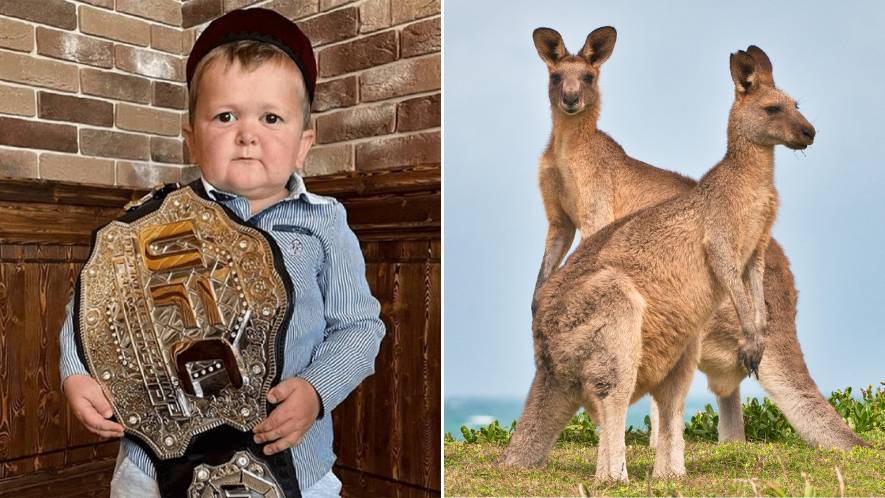 Hasbulla has revealed that he is very excited to meet kangaroos during his visit to Australia.

The internet icon has revealed her wish list while talking to the Sydney Morning Herald and said he’s gearing up for a big tour when he lands in August.

“I come from a small town in Russia, so I hope to experience a different culture,” he explained to the media outlet.

“I also know that there are kangaroos, and when I come to Australia, I would like to meet them and also visit iconic places like Bondi Beach.”

We would love to see that episode of Rescue Bondi.

In May, management company The Hour Group announced on social media that the 19-year-old would be traveling from Dagestan to Australia for a series of meet and greet events.

Unsurprisingly, this sent shockwaves through social media, with many people excited at the idea of ​​being in the same room as the 19-year-old online star.

One person wrote: “Hasbulla is coming to Australia and I’m really excited.”

Another commented: “Are you kidding that Hasbulla is coming to Australia?! I need to see it.

A third person wrote: “Hasbulla coming to Australia has made my day.”

While another fan quipped, “Does it include a fight with the little guy?”

The Hour Group’s chief executive, Chris Tamplin, told the Sydney Morning Herald that while mega-stars had previously flown, the response to the Hasbulla event has been overwhelming.

“We’ve brought people like Kobe Bryant and Shaquille O’Neal here, and yet we’ve never had a response like this,” he said.

Tamplin added: “Hasbulla is quite unique, his personality is so infectious, and when he laughs, you can’t help but laugh.”

The Hour Group CEO also teased that while the 19-year-old doesn’t speak English, he will have a translator accompany him as he takes photos with fans.

It says: “To our guests, if you wish to attend the meet and greet with Hasbulla, you are welcome to do so, but please acknowledge the limitations of photography.

“We understand the disappointment this creates; however, we respectfully acknowledge Hasbulla’s cultural and personal beliefs and have to accommodate his requests accordingly.”

Hasbulla will be in Sydney on August 29 and 30, before flying to Melbourne on August 31 and September 1.