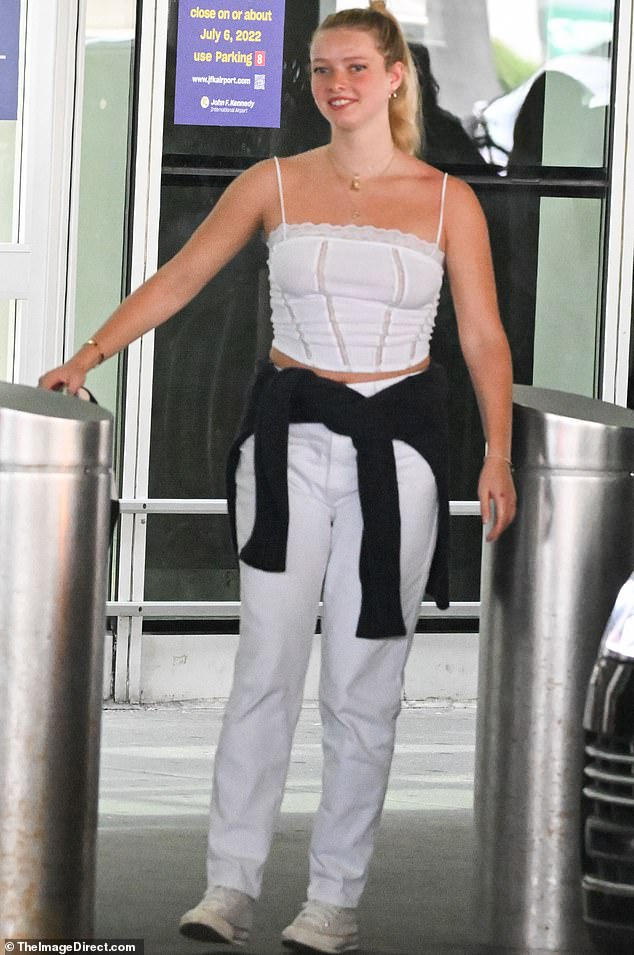 Gwyneth Paltrow and Chris Martin’s daughter, Apple Martin, 18, looks as spirited as ever upon arriving in New York.

By Sameer Suri for Mailonline

Apple looked as animated as ever as she unloaded her luggage through John F. Kennedy International Airport in Queens.

She sported a luxurious mane of blonde hair that brought back memories of her movie star mother’s signature look.

On the go: Apple Martin, the 18-year-old daughter of Gwyneth Paltrow and Chris Martin, was spotted arriving in New York City this week

Chris and Gwyneth married in 2003 and share their eldest son, Apple, as well as a 16-year-old son named Moses.

The Apple parents publicly split in 2014, when Gwyneth inspired widespread ridicule by referring to the split as a “conscious separation.”

They have remained friendly and Gwyneth is even famous for her friendship with Chris’s much younger girlfriend, Dakota Johnson of Fifty Shades Of Grey.

Here she goes: Apple looked sprightly as ever as she unloaded her luggage through John F. Kennedy International Airport in Queens

When Apple turned 18 this May, Gwyneth fired up her Instagram, writing in her caption that she was “a little speechless this morning.”

The Oscar-winning actress added: ‘I couldn’t be more proud of the woman you are. You are everything I could have dreamed of and so much more.

Before ‘conscious disengagement’: Chris and Gwyneth married in 2003 and share their eldest child, Apple, as well as a 16-year-old son named Moses.

Sue gushed: ‘Proud doesn’t cover it, my heart swells with feelings I can’t put into words. You are deeply extraordinary in every way.”

The doting mother added: ‘Happy birthday my dear girl. I hope you know how special you are and how much light you have brought to all those who are lucky enough to know you. Especially me.’

Gwyneth signed: ‘I say it all the time and I will never stop…in Aunt Drew’s words, I was born the day you were born. Love you. [heart] Breast’.

Family resemblance: Gwyneth appears with her daughter in a selfie she posted to her Instagram page last year