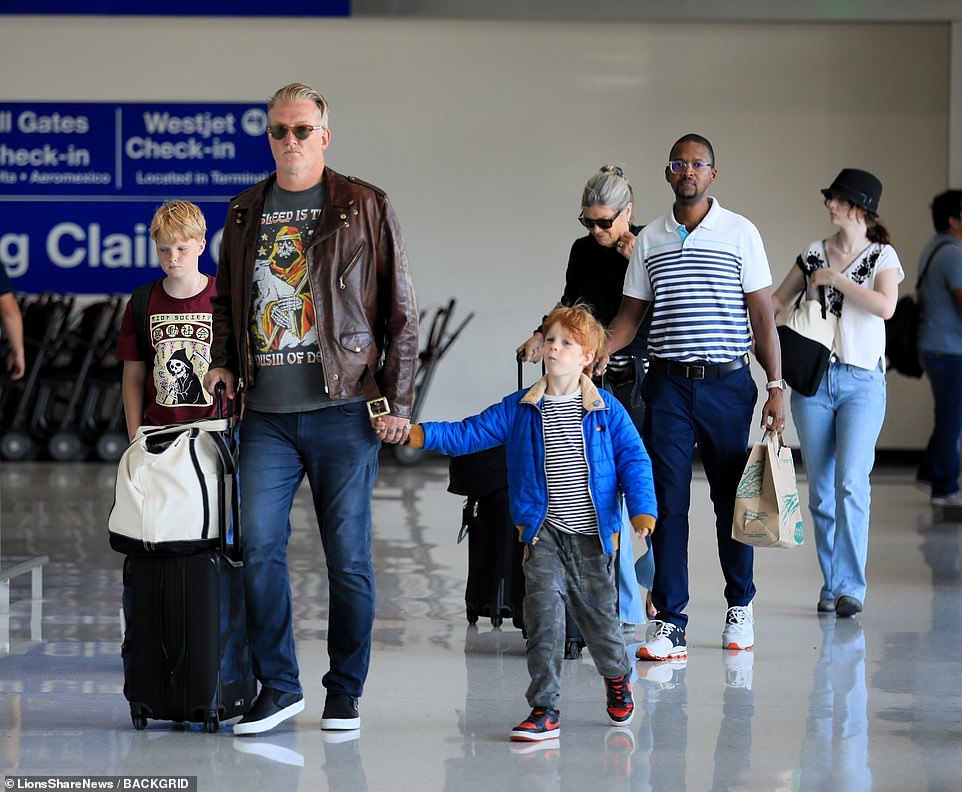 Californian rocker Josh Homme was seen at the Los Angeles airport with his children on Friday, two months after his daughter rescinded the restraining order she had taken against him.

Homme, 49, was holding hands with his six-year-old son Wolf, and a boy believed to be 10-year-old Orrin was walking nearby.

The boys tried to get a restraining order against him in September, but their request was denied.

Homme’s daughter, Camille, 15, also appeared to be with her father, dressed for summer in a bucket hat and tank top.

Camille’s request for a restraining order was successful, but in April she revoked it.

All three children were born while Homme was married to Australian singer Brody Dalle, 43.

Queens of the Stone Age frontman Josh Homme is seen at the Los Angeles airport holding the hand of his six-year-old son Wolf. A boy believed to be Orrin, 10, walks behind, as does a girl believed to be Camille, 15, wearing blue jeans and a bucket hat.

Homme is seen on stage in Byron Bay, Australia, in July 2017

The two children filed a request for a restraining order against their father in September, but the request was denied.

Homme, 49, is seen checking in as a boy believed to be Orrin looks on behind him. Camille is believed to be the girl next to her father. Her restraining order against him was granted in September and rescinded in April.

California-born Homme performs with Queens of the Stone Age and Eagles of Death Metal.

The family is seen on Friday preparing to fly out of LAX airport.

Homme takes Wolf by the hand, while Orrin walks behind

Homme, his two sons and his daughter lined up to board his Delta flight

Homme is seen with Orrin and Wolf, his children with ex-wife Brody Dalle

Homme and Dalle divorced in 2019 after 14 years of marriage.

The couple fell out in court over custody and their separation was bitter.

In September, all three children applied for restraining orders from their father and Camille received hers, but the children’s request was denied.

In November, Dalle, frontman for the punk band The Distillers, was ordered to complete 60 hours of community service after she was found guilty of holding Wolf back from court-ordered time with her father.

She was also charged with preventing Orrin from seeing Homme, but the charge was dismissed when it was discovered that the boy had made his own decision not to visit his father.

The boys, in their court papers, claimed their father was “terrifying” and detailed allegations of abusive behavior.

His attorney, Susan Wiesner, released a statement at the time saying: “The allegations made by Ms. Dalle against Mr. Homme are categorically false.

“To protect the children, we will not make any further statements.”

Queens of the Stone Age singer Josh Homme has had a tough custody battle with his ex-wife, the mother of his three children.

Homme is seen in May 2018 with Orrin, who was then six years old.

Dalle had made two previous attempts to obtain a restraining order on behalf of her children.

All three attempts were denied by different judges.

Orrin claimed in legal papers that there was a recent incident at Homme’s home in which the singer grabbed the boy’s “private parts.”

The children also claimed that their father drinks alcohol while driving with them.

Orrin claimed his father shook his ears, hit his head, hit his chest and threw things at him.

Homme has also called Orrin ‘fat’ and has also made alleged threats to murder his mother’s boyfriend.

Court documents saw Wolf allege that Homme called his mother swear words, drank and drove, and grabbed their necks and ears, adding that he is “afraid” to enter his father’s house.

The order calls for Homme to stay 100 yards away from them and the family dog ​​at all times.

Wiesner said, “Ms. Dalle has previously submitted these claims to the police, DCFS, and the presiding judge of the family law court, who have refused to take any action based on these false claims.”

Dalle also applied for a restraining order against Homme, which was granted.

Dalle filed for legal separation in November 2019 and divorce in December 2019, while also filing for a restraining order against her.

She alleged that he showed up at her house drunk and head-butted her.

He then obtained a restraining order against her.

Homme claimed that she was trying to arrest him by showing up at events to try to cause a restraining order violation.

He also claimed that Dalle punched him in the face seven times during their marriage and even threw an iron at him.

Homme’s band, Eagles of Death Metal, was on stage in Paris in November 2015 when terrorists attacked the Bataclan venue.

Homme was not in Paris at the time: his commitments to his other band, Queens of the Stone Age, frequently meant that he missed concerts with the group.

Ninety people were killed in the attack.

On Wednesday, a French court convicted 20 men of carrying out or aiding Islamist terror attacks that killed the Bataclan crowd and others. In total, 130 people died.

Salah Abdeslam, the sole survivor of the so-called Islamic State group responsible for the attacks, was sentenced to life in prison without the possibility of parole.

The verdicts came after 148 days of hearings, during which 415 victims gave testimony.

In addition to Abdeslam, five Islamic State figures, tried in absentia and presumed dead in Syria, were also sentenced to life in prison without parole.

Another defendant was sentenced to life in prison, with possible parole after 22 years. Three other defendants received 30-year sentences, which was lighter than the life sentences prosecutors had sought.

Camille Homme, 15, applied for a restraining order in September. It was extended in January and then rescinded in April.