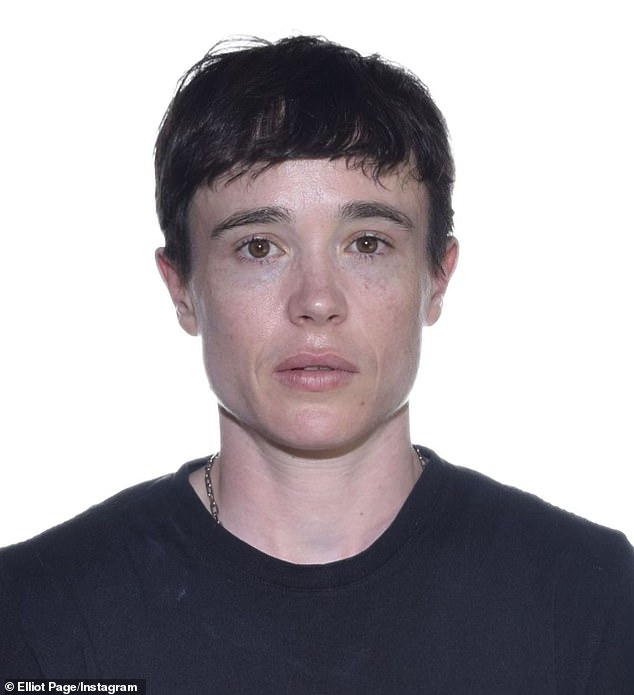 The 35-year-old actor, who uses the pronouns he/they, shared his new passport photo, which presumably reflects his own gender identity and name change.

In the photo, the Juno star donned a black t-shirt over a silver necklace.

Exciting: Elliot Page gushed over his new passport photo on Sunday as it better reflected his gender identity

His dark hair was cut with bangs that rested in the middle of his forehead.

The Inception actor was not smiling in the photo, which is standard for Canadian passports, since Page was born and has citizenship in the country.

He captioned the snap: “I never thought I’d love a passport photo.”

The new passport photo marks another milestone in Page’s life since coming out as transgender in 2020.

Stone-faced: The Inception actor was not smiling in the photo, which is standard for Canadian passports as Page was born and has citizenship in the country (pictured in 2021)

After coming out, the star ended his relationship with then-wife Emma Portner.

The actor is currently believed to be single after he filed legal papers with a Manhattan court seeking to dissolve his three-year marriage to 26-year-old professional dancer Emma in January 2021.

Emma “proudly” supported her partner’s decision to come out as transgender and later confirmed that the couple had split before the news became public.

In a statement made to DailyMail.com, Elliot and Emma revealed that they actually ‘broke up last summer’, before the actor came out as transgender and decided to make the split official.

“After much thought and careful consideration, we have made the difficult decision to divorce following our separation last summer,” the statement said. “We have the utmost respect for each other and remain close friends.”

Feeling good: Elliot has spoken about how his life after transitioning has “dramatically improved” in recent interviews.

Before releasing a statement, Emma and Elliot removed all images of each other from their respective Instagram accounts in what appeared to be a very clear message about the future of their marriage.

However, Elliot and Emma still follow each other on the social media app.

In a recent appearance on Late Night with Seth Meyers, Elliot spoke about how his life after transitioning has “improved dramatically.”

Elliot explained that he had been reflecting on “very difficult times in my life, certain struggles and obstacles and all that, and I think finally getting over that really deepens your empathy.”

“I think about the times in my life when I felt the most uncomfortable. Where he was the worst, those were the moments when he was the most angry. And I was the most unpleasant with myself or self-righteous or all those things. It has drastically improved my life,’ Elliot said.

He added, “I hope that people who have a problem with me can try to listen to that and accept it on some level.”

Art imitates life: Elliot’s character in The Umbrella Academy has also transitioned from Vanya to Viktor in season three

Sibling acceptance: All members of the character’s family reacted with love and understanding when Viktor announced his transition, pictured with co-star Emmy Raver-Lampman.

Seth asked them how they dealt with the negative reactions to their transition, though Elliot said they want to focus on the ‘degree of joy’ they feel has been extraordinary.

‘That’s really what I’m focusing on and embracing the most. But of course the moment can be overwhelming,” Elliot continued.

They added that the negativity is ‘Unfortunate, because we’re all on the same team here, you know if you’re CIS trans, non-binary, gender non-conforming, we all have these expectations and these kinds of limits and restrictions because of us, more or less people’s obsession with binary and how we’re all supposed to live our lives.

“For me, it would be very special if we could all connect and talk about how similar we are in all of our travels,” they added.

Since coming out, her character on Netflix’s Umbrella Academy has also changed.