Before becoming internationally recognized for her appearance in the 1990 film Pretty Womanthe historical Beverly Wilshire, a four seasons hotel in California, it first opened in 1928 on the site of the Beverly Auto Speedway.

In the 1950s, it would become the go-to luxury hotel for celebrities, royalty and the international elite. In fact, some big names like Elvis Presley, Warren Beatty and Steve McQueen loved it so much that they decided to live there.

I tried to live there too after a short stay in the hotel last month. Unfortunately the departure team knocked on the door at 12:00.

Nearly a century after it opened, the historic hotel, overlooking iconic Rodeo Drive, remains the go-to spot for visitors looking to stay in Beverly Hills.

Forget the lobby, the rooms, the pool and the spa for a moment. There’s something magical about standing across the street on European-inspired Two Rodeo Drive and gazing at the distinctive awnings on the property’s façade. The Beverly Wilshire is not just a hotel. Is a feeling.

It is a 30-minute drive from the airport and 20 minutes from Santa Monica beach.

But it’s the shopping you really come for, right? The Wilshire is just meters from world-renowned fashion houses and one-of-a-kind boutiques.

READ MORE: Three things you should know before traveling abroad

The hotel lobby was one of the main inspirations for the set of Pretty Womanstarring Richard Gere and Julia Roberts.

Stepping inside for the first time, it’s impossible to ignore the sparkling three-tiered chandelier and ever-changing flower arrangement below.

Don’t be surprised if you find tourists taking photos of the flowers every morning. They are somewhat iconic.

There’s even a ‘secret staircase’ located between the mezzanine and the second floor or the Wilshire Wing. It closed in the ’70s when Beatty was living in the hotel’s Veranda Suite on the 10th floor, because too many fans were trying to sneak into his room.

Then in 2008, after 40 years of being locked, hotel staff discovered the staircase.

Even now, the hotel continues to receive fan letters from the actor in its iconic 1928 mailbox located next to the lobby elevators.

The property recently opened the first stage of a remodeling project that includes the rooms and suites.

Renovated rooms were designed to offer “touches of old Hollywood drama and glamour, with an inspired contemporary twist.” They are inspired by the 1934 white drawing room of the British interior designer Syrie Maugham.

I stayed in the Signature room with a balcony and fell in love with the views and the large marble bathroom. Brownie points for the eco-friendly refillable amenities.

The spa and pool

“I just had the best massage of my entire life.”

That was the text I sent to my fellow travelers after visiting Gillian Garcia, the lead therapist at the Beverly Wilshire spa. She technically gave me a Holistic Detox Body Treatment, which lasted 90 minutes, but I slept so much that it is impossible to know for sure. When I left The Spa, I felt like I was floating. Also try the aromatherapy crystal steam room.

Next? A quick dip. The Mediterranean-style pool is modeled after the one in Sophia Loren’s private Italian villa.

Overlooking the pool deck and 24-hour fitness center. Bottled water is provided and personal training is available upon request.

Beverly Wilshire is home to Cut, Wolfgang Puck’s Michelin-starred steakhouse. It’s also home to my dinner-induced food coma. Try the Tomahawk steak or the Jidori chicken, but arrive on an empty stomach.

If you enjoy people-watching while dining all day, THEBlvd Restaurant and Lounge, with its terrace overlooking Wilshire Boulevard, is the answer.

Now take a pen and write this: giant croissant. Did you get it?

If you’re looking for the true Hollywood experience with a side of grand history and glamour, the Beverly Wilshire, A Four Seasons Hotel is the answer.

This writer was a guest of The Beverly Wilshire, a Four Seasons hotel Y love beverly hills. 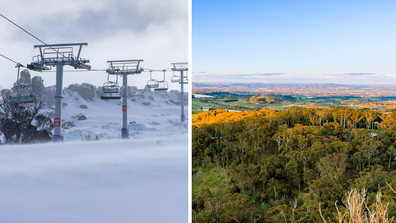 10 of the top Australian winter destinations for 2022