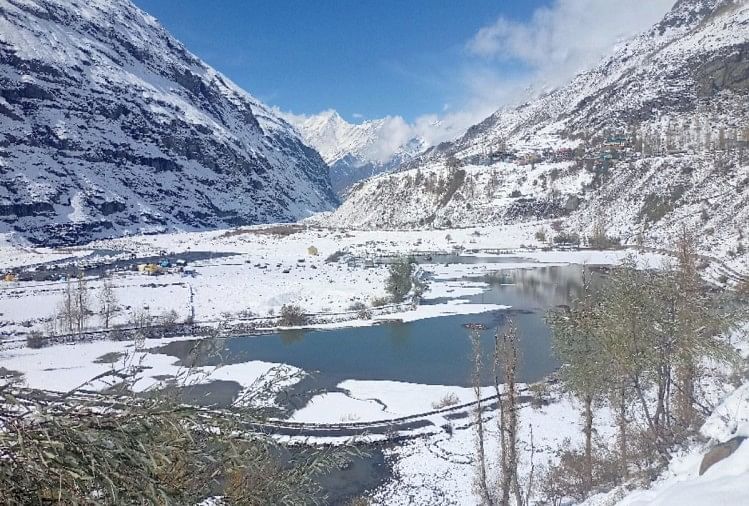 View of Sissu Lake after the avalanche. – Photo: Amar Ujala

Fresh snow fell in the highlands of Himachal Pradesh on Wednesday. Nearly half an hour in the afternoon in the capital Shimla was followed by rain and hail amidst thunderstorms. The climate in other parts of the state is mixed. Light clouds over several districts. The maximum temperatures in the state dropped by two to three degrees. The weather in the state is expected to remain calm till October 31. On Wednesday, traffic was halted on 21 roads, including two national highways in the state.

22 power transformers were also shut down. Five millimeters of rain fell in Shimla and 2.5 millimeters in Kufri. According to the State Disaster Management Cell, traffic between National Highway Teen Darcha and Sarchu and between National Highway 505 Granfu and Loser was closed on Wednesday. A maximum of 19 and two roads in Kullu were closed in Lahaul-Spiti district. Fifteen power transformers were down in Kullu district, five in Lahaul-Spiti and two in Hamirpur.

In Kullu, 16 pucca houses were damaged. The entire valley along the Atal Tunnel Rohtang is snowing until dawn on Wednesday. As a result, the entire Lahaul Valley became cold. The administration has appealed to tourists to come to Lahore only after smelling the weather.

In the afternoon tourists can go out to see the snow

The Lahaul-Spiti administration has ordered tourists not to move in the valley due to changing weather conditions. It was snowing in the Lahaul Valley until 11am. During this time, vehicular traffic over the Atal Tunnel Rohtang was also closed. After this the weather opened up and the tourists who reached Manali for the picnic breathed a sigh of relief. In the afternoon, tourists went to the northern portal of the Atal Tunnel Rohtang, Sisu and Coxar and enjoyed the fresh snow.

After the weather opened, HRTC Keylong’s inspection team inspected the tunnel from Keylong to Dhundi at the South Portal of the tunnel. Only after this was the bus service between Manali and Keylong restored. The public was relieved as the bus service started with vehicles on both sides. Superintendent of Police Lahaul-Spiti Manav Verma said the weather in the valley was changing. In such a situation, the general public and tourists need to sense the weather and reach the sensitive areas of the valley along with the Atal Tunnel. Deputy Commissioner Lahaul-Spiti Neeraj Kumar said there was a risk of landslides in the tunnel and surrounding areas due to snowfall. In such a situation, tourists should not travel.