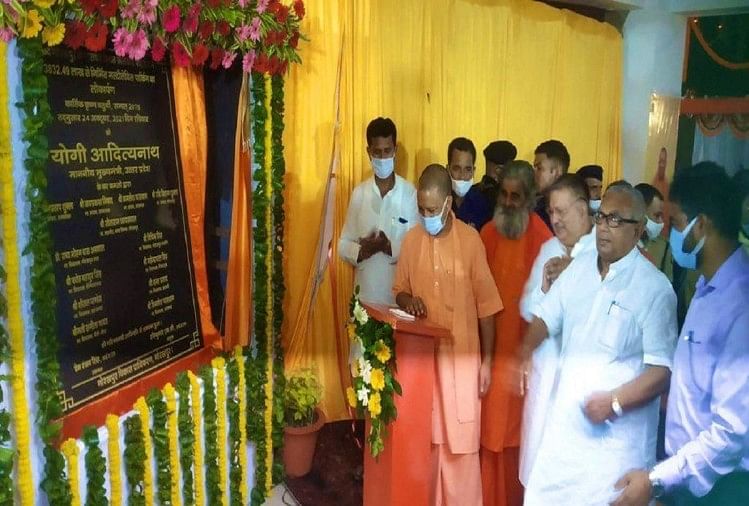 Uttar Pradesh Chief Minister Yogi Adityanath on Sunday said the corona epidemic in the state was on the verge of ending. Yogi addressed a gathering at Gorakhpur on the occasion of the inauguration and foundation stone laying of development projects worth Rs 180 crore. The Chief Minister said that people were afraid to come to Gorakhpur 25 years ago. Today Gorakhpur remains synonymous with development in the world. He said that development is the result of collective effort. After prolonged rains, this development process before Diwali is going to make the new Gorakhpur vision come true. With this, Gorakhpur will be recognized nationally and internationally.

Speaking at the inauguration and foundation stone laying ceremony at Deendayal Upadhyaya Gorakhpur University campus, the Chief Minister said that Uttar Pradesh has set a record by providing anti-coronavirus vaccination to over 12.60 crore people and conducting corona tests on over 1.25 crore people. 80 lakh beds are ready in UP hospitals for treatment. Today Uttar Pradesh is not weak in any way, but is at the forefront in the country. This development idea needs to be taken forward rapidly.

Chief Minister Yogi said Uttar Pradesh was ahead in all central government schemes. The state ranks first among 44 schemes in the country. Whether it is Swachh Bharat Mission, Pradhan Mantri Awas Yojana, Swanidhi Yojana, Saubhagya Yojana, Ujwala Yojana, Ayushman Yojana, Swamitva Yojana or Startup etc. In Uttar Pradesh, the schemes were supposed to be implemented seven years ago but the previous government ignored the public interest. When Janata Janardhan formed the BJP government in the state four and a half years ago believing in Prime Minister Modi, all the schemes were implemented. It has brought a positive change in the life of every poor person. Everyone is reaping the benefits of development schemes without any discrimination.

The Chief Minister said that the fertilizer factory, AIIMS was almost ready. Both will be launched by Prime Minister Modi. These projects set new dimensions for development. He said that Ramgarh was breaking new ground in tourism. The water sports complex opens the door to new opportunities for tourism as well as youth. He said that what was a dream before is coming true today. The Chief Minister said that the BRD Medical College, which was in ruins ten years ago, was reminiscent of Baba Raghavadas’ medical college, which came to life during the Corona era with state-of-the-art facilities. .

Expressed happiness over the dignity of sanitation workers

At the event, 11 sanitation workers received gifts, costumes and testimonials at the hands of the Chief Minister. The CM said honoring corona warriors was commendable. During the Corona period, from health workers to scavengers, they served as a pillar. Gorakhpur is almost on the way to liberation from the corona, the CM said. Vaccination continues on a war footing. In Uttar Pradesh, 43 lakh houses have been sanctioned for the rural and urban poor.

The Chief Minister handed over the house locks to 11 beneficiaries

The Chief Minister laid the foundation stone for the Integrated Traffic Management System (ITMS). He said that this would not only reduce traffic management and accidents but also curb crossings and robberies. If someone is harassing sisters or daughters or robbing a businessman, looking through ITMS’s CC camera, the police will be ready to welcome him at the next intersection. Everyone knows how to receive him.

21 intersections in the city are connected to the system

The Chief Minister directed the officials from the platform to complete the rain-hit projects in a timely manner with quality. Barasat surpassed the 70-80 year record. This caused some problems. He directed the Municipal Corporation, GDA and PWD officials to make permanent arrangements for the prevention of waterlogging. Even in the suburbs, roads, electricity, drainage, etc. should be expedited and facilities should be provided to every citizen. The Chief Minister also mentioned about the construction of the new building of the Municipal Corporation and said that this building which is being constructed after 100 years stands as a proud achievement.

Electric buses are becoming an easy means of transportation

The Chief Minister said that 25 electric buses will be run in Gorakhpur in the near future. These buses are becoming an easy means of transportation. Earlier city buses operated here were closed due to maintenance error. Today the charging station for electric buses is also dedicated.

Were at the ceremony

The Chief Minister laid the foundation stone for these works.

– Cleaning of canals with phytoremediation – 6.78 crores

These works have been initiated