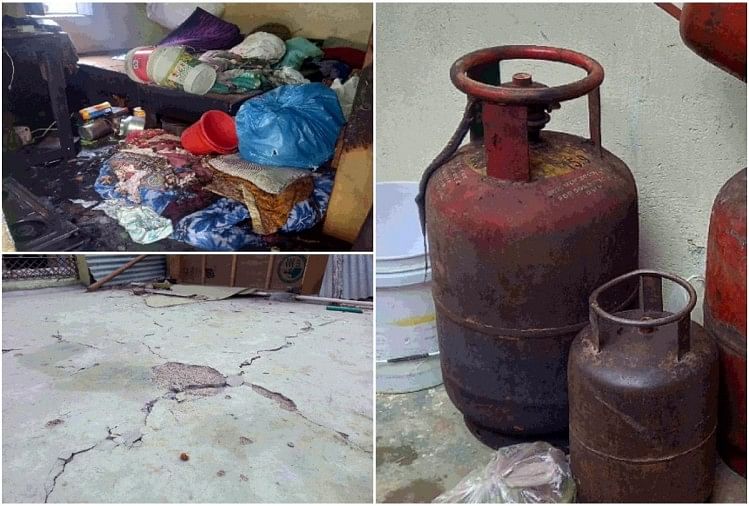 A fire broke out on Thursday night when a Scooty battery exploded while charging in a rented room in front of the Ramada Hotel under the Sector-40 police station in Gurugram. An elderly man died on the spot from suffocation due to fire and smoke, while a woman and her three sons sustained burn injuries. Neighbors removed the window grill and brought everyone out to put out the fire. The woman and her son were in critical condition and the two were discharged from the hospital. According to police, Jile Singh had built and rented rooms in front of the Ramada Hotel. Suresh Shah (60) from Darbhanga Bihar has been living with his wife Reena, sons Manoj, Saroj and Anuj for four years. Suresh buys tea at the CNG pump. Manoj and Saroj work for a battery scooter company. Everyone slept in their room around 11pm on Thursday night. At this point, the scooter battery was left charging in the room.

At night she suddenly exploded. A fire broke out in the room and smoke filled the room. Satish, who was staying in front of his room, heard the blast and ran out. Crowds gathered from an adjoining room as smoke billowed. Afterwards tried to pick up the door. The iron grill on the window was cut off from the outside as the doors did not open. Went inside the room and opened the door and took everyone out. Suresh is already dead.

Upon receiving the information, the police rushed all the injured to the hospital. From there, the woman and her sons were rushed to the Safdarjung Hospital in Delhi. The condition of the woman and one of her sons there was critical. SHO Police Station Sector-40 said one person died of suffocation due to fire and smoke and the woman and her son were being treated. Woman, the condition of a son is poisonous. Two sons were discharged. There is a risk of fire if the battery explodes while charging.

The explosion caused cracks in the ceiling

Neighbor Suresh said he was sitting down to dinner. Then there was an explosion with a loud noise. He heard an explosion and ran outside. Then smoke came from under his room door. With the cooperation of all the tenants the victims were pulled out and watered and the fires brought under control. The blast was so strong that cracks appeared in the gutter slab roof. Fortunately the danger would have been even worse if the roof had not collapsed.

Many would have died if the cylinder had caught fire

The house where the accident took place has seven rooms. Seven of these families live on rent. Suresh also kept a large and small cylinder filled with gas in the room. It is a privilege to hear the voice of the neighbors in a timely manner and bring the fires under control with the cooperation of the people. The explosion would have been even bigger if the cylinder had caught fire. Many lives were lost because of this. The great danger was averted by raising awareness among the people.