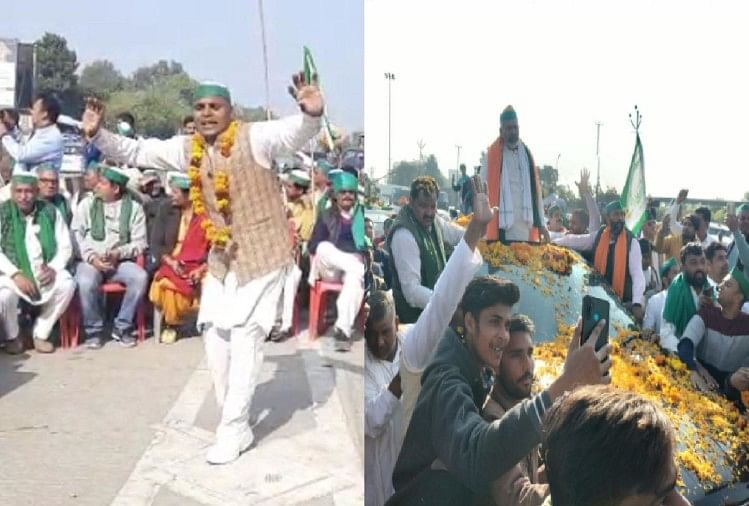 BKU national spokesperson Rakesh Tikait, who left for his hometown of Sisouli on Wednesday from the Ghazipur border in Delhi, received a warm welcome from many quarters. On this occasion he showered flowers on the convoy. Not only that, farmers in Meerut also danced during the festival. As soon as the Rakesh Tikait convoy reached Partapur, the farmers started singing and dancing. Rakesh Tikait then reached out to the farmers and said it was a victory for all of us. At the same time they fed each other sweets and celebrated happiness.

The convoy of Indian Kisan Union (BKU) national spokesperson Rakesh Tikait reached Khatauli on Wednesday from the Ghazipur border over the Sevaya toll plaza in Meerut. From here the Tikait convoy set off for the sun. Hadoli said major events will be held in Sisauli. At the same time the Kisan Bhavan was decorated with lights. There was an atmosphere of excitement among the BKU activists.

Workers greet the convoy with a shower of flowers at the Shivayya Toll Plaza in Meerut. Here the Tikait convoy stopped for a while and set out for Sisouli.

Welcome to Tikait‌ with a shower of flowers. – Photo: Amar Ujala

Tikait said – everyone’s winning, no idea of ​​contesting the election

On his way back from the Ghazipur border, the Bhakti National Spokesman greets the convoy with a shower of flowers. Speaking to media at Shivayya Toll Plaza, Rakesh Tikait said, “It is a victory for all and the cooperation of sanitation workers, farmers, doctors, media and the public is immense.” Thank you all

Agricultural laws have been repealed. The government has proposed a guarantee law on MSP to compensate farmers who are stranded at the border. Bringing back agricultural law is a victory for the farmers of the country. All the farmers celebrate after reaching home. At the same time, five hours later, the Shivayya toll plaza was completely handed over to the toll workers.