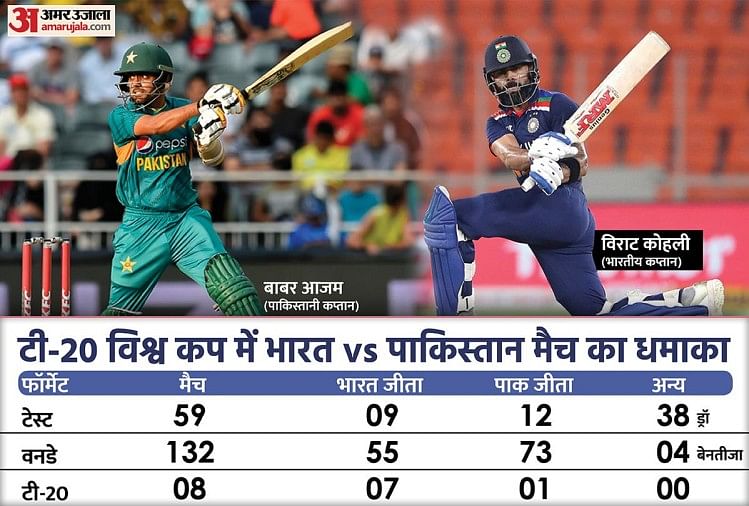 The T20 World Cup begins. India and Pakistan will meet in a great match on Sunday. The match will take place on Sunday night at 7:30 pm at the Dubai International Stadium. The toss will take place at 7pm, half an hour before that.

Almost five years later, the two teams will meet in the T20. The last T20 match between India and Pakistan was played on March 19, 2016. India beat Pakistan by six wickets in the ICC T20 World Cup.

The Pakistan team has lost every time in the World Cup

In addition to the T20, the Indian team has always won over Pakistan in the ODI World Cup. A total of seven matches were played between the two teams between 1992 and the 2019 World Cup. Team India have beaten Pakistan seven times.

Relations deteriorated after the 2008 terrorist attacks


India has not visited Pakistan since the 2008 Mumbai terror attacks. At the same time, the relationship deteriorated further after the ceasefire violation along the Line of Control and the Pulwama attack in February 2019. There have been no Test series between the two teams since 2007-08. India and Pakistan have come face to face only through ICC tournaments.

India and Pakistan have not played a single bilateral series in the last nine years as a result of terrorist attacks and ceasefire violations. The last T20 and ODI series between the two took place in December 2012. The T20 series was drawn 1-1, while Pakistan won the ODI series 2-1.

We are telling you about the matches between India and Pakistan in the T20 World Cup.

1. Group Stage: India beat Pakistan in a ball out

Man of the Match: Robin Uthappa

The first T20 World Cup was held in 2007. The two teams have already met in Group 10 of the World Cup. Pakistan captain Shoaib Malik then won the toss and elected to bowl first. Batting first, India scored 141 for 9 in 20 overs with Robin Uthappa scoring a half-century.

With this, the Pakistan team was able to score only 141 runs for seven wickets in the allotted 20 overs. Misbah-ul-Haq top-scored with 53 runs. There was no super over at the time, instead ball outs were played. The bowlers from both the teams had to take five wickets each.

Man of the Match: Irfan Pathan

The two teams met in the final after the group stage. India captain Mahendra Singh Dhoni won the toss and elected to bat first. Gautam Gambhir (75 off 54 balls) and Rohit Sharma (30 * 30 off 16 balls) put on 157 for the loss of five wickets in 20 overs.

In response, Pakistan’s top order batsmen erupted. Rudra Pratap Singh, Irfan Pathan and Joginder Sharma are the only Pakistan team ahead. Pakistan lost nine wickets for 141 runs. However, Misbah-ul-Haq was at the crease. The Pakistan team needed 13 runs to win the last over.

While playing the trick, Dhoni gave the ball into the hands of Joginder Sharma. Misbah hit a six off the second ball of the over. While trying to hit a huge shot at the fine leg for the third ball, the ball went into the hands of Sreesanth unable to cross the boundary line at low speed. India won the match by five runs.

Man of the Match: Virat Kohli

Where is Pakistan going to remain silent after India become world champions? Pakistan won the second edition of the tournament. It did not face India. At the same time, the two teams did not meet in the 2010 World Cup. In 2012, India and Pakistan met in the Super-8 round. Batting first, Pakistan were all out for 128.

The Indian team chased down the target in the 17th over. Virat Kohli was unbeaten on 78 off 61 balls. Virender Sehwag (29) and Yuvraj Singh (19) were unbeaten in the innings.