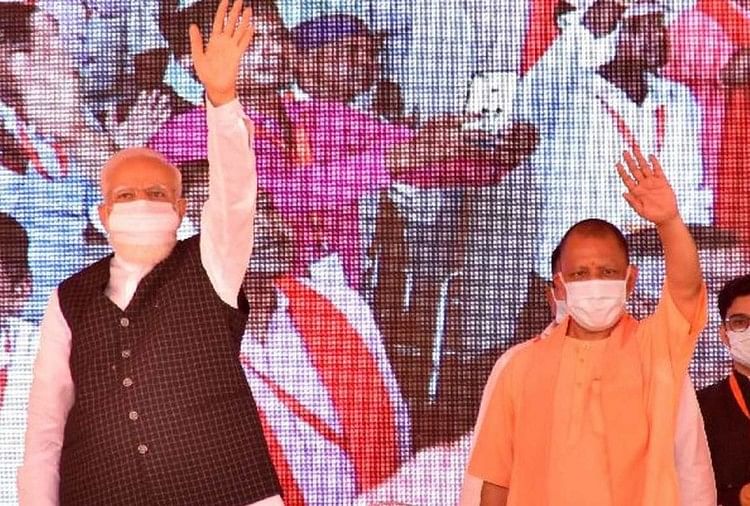 From the land of Lord Buddha, Prime Minister Narendra Modi enticed Brahmin voters in Purvanchal and UP. Describing Jan Sangh campaigner, MP and MLA Madhav Prasad Tripathi as a karma yogi from the BSA ground, the Prime Minister said his naming was a true tribute to Siddharthnagar Medical College. For this work, the Prime Minister also congratulated the UP Chief Minister and his entire team and said that Madhav Babu will always be inspired for public service.

In the run-up to the forthcoming Assembly elections, there is competition to woo Brahmin voters. BSP is organizing the Enlightenment class conference. The Congress and the SP are also trying hard. Meanwhile, Prime Minister Narendra Modi inaugurated the Madhav Prasad Tripathi Government Medical College in Siddharthnagar, giving the BJP the lead in the election race. This was also reflected in Prime Minister Narendra Modi’s speech.

Speaking in a public meeting for about 28 minutes, Prime Minister Madhav Prasad repeatedly mentioned Tripathi’s name. The Prime Minister said that Madhav Babu has contributed a lot to the society. Purvanchal is talking about UP development after getting a place in the Union Cabinet. Now a medical college is named after him. Madhav Babu, a young man who comes to read MBBS, takes inspiration from medical and health as well as public service. Doing real public service when you go out after graduation. Political experts are of the view that the Prime Minister’s speech was linked to enticing Brahmins. Chief Minister Yogi Adityanath laid the foundation stone for Madhav Prasad Tripathi Medical College on 26 December 2018. Now the Prime Minister has started.

Find out who Madhav Babu is


The Prime Minister also protected the SC voters from the government Buddha. The Prime Minister visited Buddha’s land for the second time in a span of five days (Kushinagar, now Siddharthnagar on October 20). The new dawn of health is coming.

The religious and cultural agenda is also on the edge

Social and caste equations have also been simplified