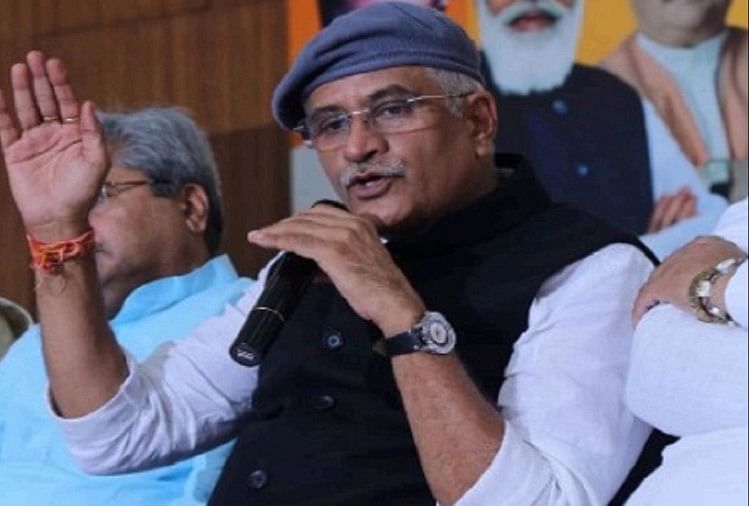 Union Water Resources Minister and BJP election in-charge in Punjab Gajendra Singh Shekhawat said the BJP was fully prepared for the Assembly elections. Nava Punjab- BJP activists will go public with the slogan ‘De de Naal’. The BJP will enter the election ring with the intention of enriching Punjab beyond drug abuse, mafia and corruption. Each community in Punjab is given a political share in its population ratio.

At the BJP headquarters in Chandigarh on Thursday, Punjab election in-charge and Union Minister Gajendra Singh Shekhawat said the people of Punjab were frustrated with the Congress, Akali Dal and Aam Aadmi Party. People are looking hopefully towards the BJP. The Modi-led central government has made historic efforts for Punjab and Punjabis in the last seven years.

Taking into account the work done by the Central Government for Punjab, he said that there was a lot of work to be done to sit down the 1984 riots, clear the Sri Kartarpur Sahib corridor, remove the blacklist, remove the anchor from the GST, give the FCRA to the Sri Harmandir Sahib. PGI’s satellite hub at AIIMS, IIM in Amritsar, Sangrur and Ferozepur, two new airports, a new circuit of tourism and huge infrastructure projects have boosted confidence in the BJP in the minds of the people of Punjab.

Shekhawat expressed confidence that the BJP was ready for elections in all 117 seats in Punjab. The party has appointed its eminent leaders as in-charges for all positions. The fact that more than 5,000 social and political activists have joined the party in the last six months shows that the party’s popularity is growing rapidly.

Welcome to Captain‌ with analogy
Speaking on the captaincy, the Union Minister said the BJP always welcomes like-minded people. He said the central government and the BJP were completely sensitive when it came to agricultural laws. Seriously trying to solve this problem. The government has held 11 rounds of talks with farmers’ unions. The government is also ready to amend the laws based on the issues raised by the farmer unions.

Calculate the work done for the benefit of the farmers
The Union government has so far deposited about Rs 24,000 crore directly in the accounts of about 8 lakh farmers in Punjab, the Union Minister said. It was a revolutionary move for the farmers of Punjab. This time, the government procured a record 405 lakh metric tonnes of wheat, of which 132 lakh metric tonnes was procured from Punjab alone. The government has also increased the MSP for farmers ’crops. 26,73,26,56,000 (approximately Rs. 27 billion) has been deposited in the accounts of 23,33,598 farmers in Punjab under the Prime Minister’s Kisan Samman Fund Scheme. More than 17 lakh soil health cards, neem coated-urea, e-nam platform etc. were provided to Punjab farmers.

Politics is going on in the BSF case
The Union Minister said that the Central Government has shifted the jurisdiction of the BSF in 10 states and two Union Territories of the country. In the border states of Gujarat, Rajasthan, West Bengal and other states, including Punjab, the area has been increased from 15 km to 50 km. The BJP strongly condemns the politics of the Congress government in Punjab and other opposition parties on the issue. The then Chief Minister Capt Amarinder Singh has also repeatedly expressed grave concern over the trend of drones and weapons coming from across the border in the last few years.

Congress has failed in all areas
Speaking on the growing dissent in the Punjab Congress, Shekhawat said the government has failed in all areas. Therefore, to divert people’s attention from the real problems in Punjab such as Drugs Mafia Raj in Punjab, justice for the victims, corruption, industrial migration, deteriorating security, rising unemployment, depressed economy etc. Agricultural Laws and BSF. Working. The Punjab Assembly sessions convened by the government on November 8 were one such attempt. The BJP will not let these atrocities succeed.

The Punjab BJP has appealed to farmers’ unions that the government postpone three agricultural laws for 1.5 years. The Punjab BJP is also expressing its commitment to this meeting for a permanent solution to the problem of farmers. Gajendra Singh Shekhawat, Union Minister