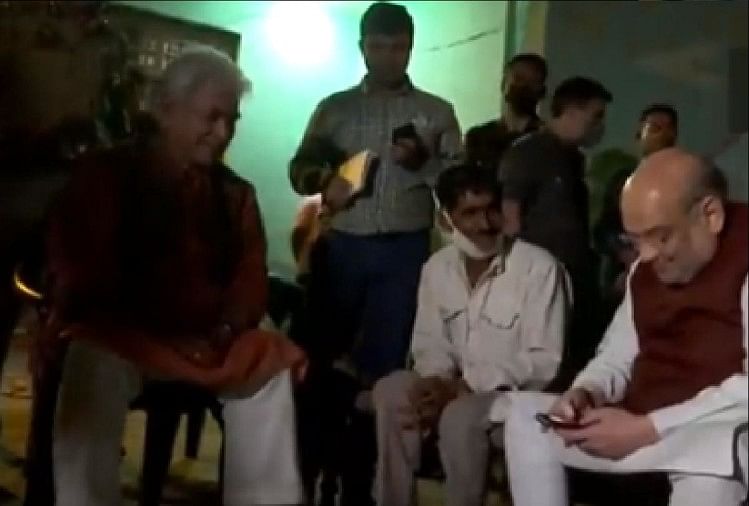 Union Home Minister Amit Shah reached the Maqwal border in Jammu on Sunday. Here he also conversed with the soldiers. He said the government led by Prime Minister Narendra Modi would take care of their families and protect the country without any worries. He took the mobile number of a local resident and also shared his number. Citizens were told they could contact themselves when needed. He also told the people that the Modi government was committed to provide every facility and ensure development in the border areas. He was accompanied by Lieutenant Governor Manoj Sinha.

Earlier, at the Bhagwati Nagar ground, Amit Shah had said that various conspiracies were being hatched to disrupt peace in Jammu and Kashmir. He assures the people of the state that these conspiracies are futile and will not be allowed to succeed. The youth in the state are on the path of development and the terrorists cannot harm them.

Shah, who lashed out at the opposition, said the era of injustice to the people of Jammu was over. Justice will be done to both, whether it is the partition of Jammu or Kashmir. No one will be wronged under Prime Minister Modi’s rule. The era of development began in Jammu. The youth were alert. Terrorists can do no wrong if the youth are engaged in the service of the poor.

The three families are said to be joking about who will come here to invest after the 370 is removed. Huge investment proposals are coming. It has invested Rs 12,000 crore so far. Of this, Rs 7,000 crore is in Jammu and Rs 5,000 crore in Kashmir.

By the end of 2022, Rs 51,000 crore will be invested. Five lakh youth will get employment. They are asking questions about what Amit Shah will give on the tour. First, three family members describe 70 years of work, and then ask questions.

Amit Shah said that more than Rs 15,000 crore has been announced from Jammu today. 15,000 crore was not done to the three families during their reign.

In Jammu and Kashmir, 239 people have been killed in terrorist attacks since 2014. This number has been reduced but we want to create a situation where not a single citizen dies.