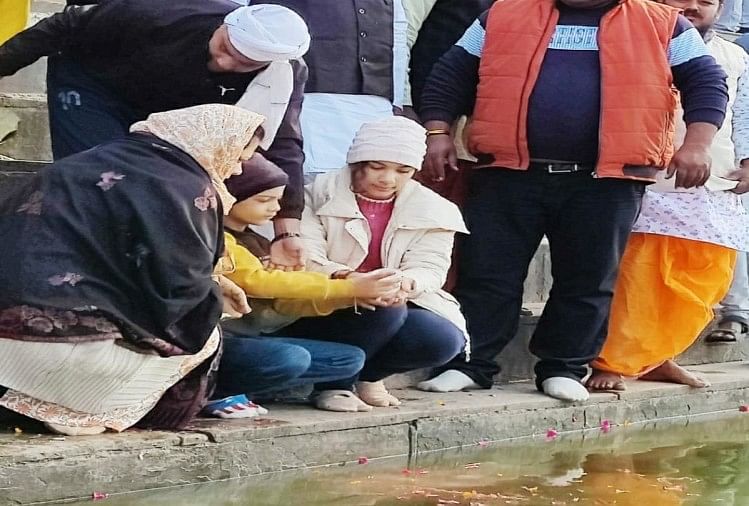 People holding a tricolor flag in their hands at Bara Ghat in Soronji during the immersion of the ashes of martyr Prithvi Singh Chauhan. Along with the wife the son and daughter completed the ritual.

Also read …
Helicopter crash: Red man from Agra martyred, father cries over gift of son Prithvi – This clock will never stop for you

On December 8, an Air Force helicopter crashed in the Coonoor area of ​​Tamil Nadu. General Bipin Rawat, along with his wife and 14 soldiers are on their way to the Defense Services Staff College in Wellington. The accident happened on the way. Chief of Defense Staff (CDS) Bipin Rawat and Lal Wing Commander Prithvi Singh of Agra were also killed in the helicopter crash. Sharan Nagar resident Prithvi Singh Chauhan is the pilot of the helicopter. His funeral was held in Agra. The mayor announced that Sharanagar will be renamed as Shaheed Prithvi Singh Nagar in memory of the martyr. At the same time, the new site of the Tajganj Mokshadham was also dedicated to the name of the martyr. Chief Minister Yogi Adityanath and Deputy Chief Minister Keshav Prasad Maurya arrived in Agra to pay tributes to the martyrs.

Prithvi is the only brother of four sisters

Helicopter crash: Red man from Agra martyred, father cries over gift of son Prithvi – This clock will never stop for you