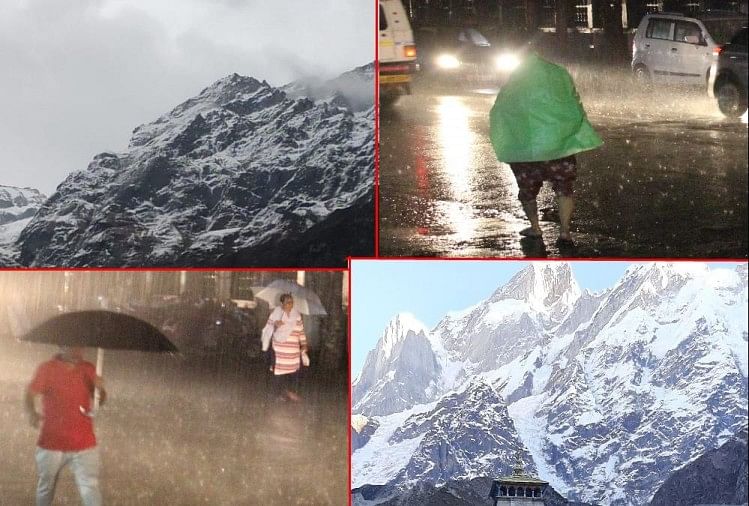 On Sunday, the weather in Uttarakhand once again changed its direction. While it has been sunny across the state since morning, it has been snowing in the hilly areas since evening and the ground chill has increased due to lack of rain. The peaks of Badrinath and Kedarnath are covered with snow. At the same time, the first snowfall of the season occurred at Yamunotri Dham. The highest peaks of Gangotri are also covered with snow.

Uttarakhand: SOP will be prepared for mountaineering and trekking, Tourism Minister Satpal Maharaj

Due to active Western disturbances in states like Jammu and Kashmir and Himachal Pradesh, including Uttarakhand, the climate has once again changed in the capital Dehradun, districts like Uttarkashi, Tehri and Chamoli. Windy torrential rains lashed the surrounding areas, including the capital, while hailstorms lashed parts of Vikas Nagar and Mussoorie. Mercury in the capital Dune fell sharply from nine degrees to 21 degrees.

In the afternoon, snow falls on the surrounding peaks, including the Nilakantha and Narnarayana Mountains behind Badrinath Dham. Due to the snowfall on the peaks, Dham is cold. Despite the winters in Dham, pilgrims continue to visit Badrinath Swamy Darshan. Despite the cold weather, the excitement among the travelers did not abate. There is a constant flow of pilgrims coming to Dham.

On the other hand, it was foggy in Kedarpuri in the afternoon. Snow also fell on the upper hills at this time. By noon the clouds were doing without a squint on the eye to the sun. After that a strong wind blew in the middle. At the same time, thick clouds covered the sky. On the other hand the weather in Kedarnath has been bad since morning. Light snow fell on the upper hills in the afternoon. Kedarnath was cold due to fog.

It is snowing in Uttarakhand – Photo: Amar Ujala

The first snowfall in Yamunotri Dham also started in the afternoon. Twelve villages in the Gitbelt, including Kharshali, Jankichatti, Phoolchatti and Banas, received heavy rains simultaneously. In Yamunotri, Yamuna priests Anoj Unial and Ashutosh said that it would snow in Dham. This is the first snowfall in Dham this year. At the same time, there is darkness in the Yamuna Valley, including Yamunotridham, due to power outages.

Along with Dehradun, strong winds lashed some parts of Haridwar, including Vikas Nagar, Mussoorie and other parts of the district. Trees in many parts of the state, including Vikas Nagar, have disrupted labor traffic. According to Vikram Singh, director of the meteorological center and a senior meteorologist, it is likely to snow in the mountains in the coming days. From Monday the weather will be clear in the plains areas including the capital Doon.