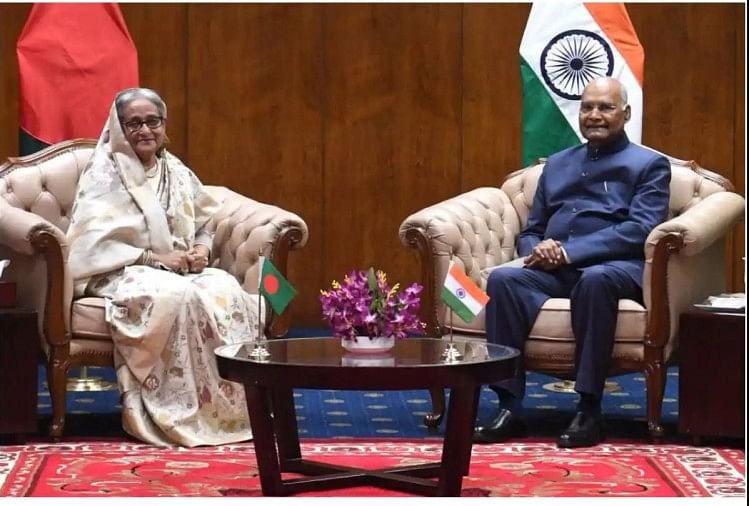 President Ramnath Kovind arrived in Dhaka on Wednesday as part of a daily visit to Bangladesh. He received a warm welcome at the Dhaka airport and was greeted with 21 guns. He will be the chief guest at the Victory Day celebrations on Thursday to mark the 50th anniversary of Bangladesh’s independence.

President Kovind’s wife Savita Kovind and daughter Swati arrived at Hazrat Shahjalal International Airport in Dhaka on an Air India One special flight. Shortly afterwards, he was offered a 21-gun salute. He was welcomed by the President of Bangladesh M Abdul Hamid along with his wife Rashida Khanum. Later, at the airport, President Kovind was given the Guard of Honor by the Bangladesh Army personnel.

Indian Foreign Secretary Harshavardhan Shringla has said that President Kovind and First Lady Savita Kovind will attend the national parade in Dhaka on Thursday. A 122-member team from the three Indian Armed Forces will also take part in the parade. The Prime Minister of Bangladesh Sheikh Hasina met with President Ram Nath Kovind in Dhaka and the two leaders discussed a number of issues of mutual interest and bilateral cooperation.

Foreign Secretary Shringla said the two leaders emphasized on maintaining friendly and multifaceted relations between the two countries, jointly preserving the Bangabandh heritage and the 1971 war. He said work on the India-Bangladesh pipeline was in progress. We will reach the stage of inauguration within the next year.

Tributes were paid to the founder of the country, Bangabandhu

President Kovind visited the Bangabandhu Memorial Museum here and paid tributes to Bangabandhu Sheikh Mujibur Rahman. He planted an ‘Ashoka’ plant in the memorial garden. The visitors here signed the magazine and expressed their happiness over the celebration. Kovind will also meet Prime Minister Sheikh Hasina here. He will also visit the Kali Temple at Ramana as part of a three-day trip.

Tributes to those martyred in the Bangladesh Liberation War

President Ramnath Kovind on Wednesday paid tributes at the National Martyrs’ Memorial, which lost its life in the Bangladesh Liberation War. Foreign Ministry spokeswoman Arindam Bagchi tweeted that the President had said that the inspiration of those who gave their lives for the realization of the ideals of the freedom struggle should guide our thoughts and actions.

Shringla said in the Rohingya case

On the Rohingya issue, Foreign Secretary Shringla said, “We have always called for the permanent and speedy return of the homeless in Rakhine State, Myanmar.” We have always worked with Bangladesh and Myanmar to resolve this issue.

# See | “We have always called for the steady & rapid return of displaced persons to Rakhine State in Myanmar. We have always worked with Bangladesh & Myanmar to resolve this issue,” FS Harsh Vardhan Srigla of Dhaka on the Rohingya issue said. pic.twitter.com/cCVLaaG1DK