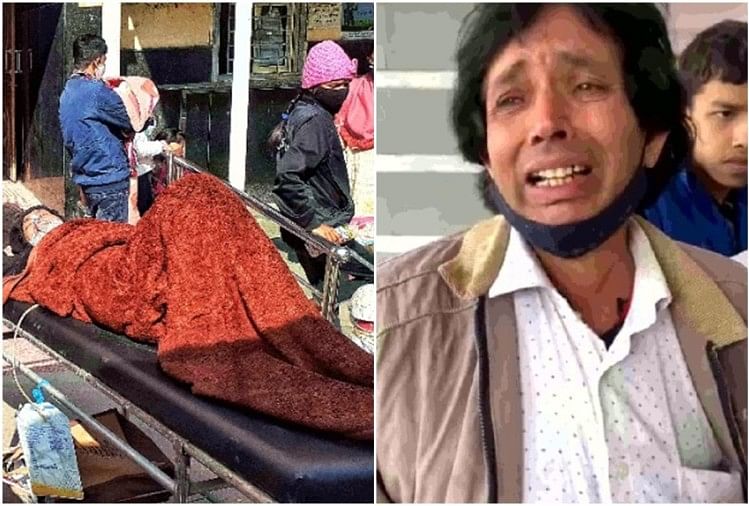 ‘Sir! My sister has been suffering since last night. The poor man suffered greatly. I made three trips to the hospital by ambulance. No one is listening to me. Some will send somewhere, some will send somewhere. As soon as he sits in the chair and sees the patient, he orders that he be taken to another hospital. Everyone folded their arms No one was looking at Sir Akka. The security guards told him to take him from outside to another place as soon as he got here. Now even the ambulance man has left us and fled sir. Something with her … ‘Arvind’s words that stopped at once brought tears to his eyes. Arvind cried for about an hour and a half when he saw his sister in agony but her tears did not melt anyone’s heart and he finally took his sister home in an auto rickshaw.

The incident took place at Safdarjung, one of the largest hospitals in Delhi, from 8.30 am on Friday when Arvind was standing with his sister Lakshmi amid cold winds. Arvind said that he was a resident of Hyderabad, first took his sister Lakshmi to Ambedkar Hospital Rohini and then brought GB Pant from there, but even here no one heard, and then he reached Safdarjung Hospital.

Like Arvind, there are many patients who have not been treated in the hospital and have not received treatment. Sunil Kumar, a resident of Delhi, was rushed to Safdarjung Hospital OPD in a wheelchair but was informed that doctors were on strike. After waiting for about an hour, Sunil was also rushed to the emergency ward, but was sent back after doctors there advised him to come to the OPD and get tested.

In fact resident doctors in Delhi have been on strike since Friday against the delay in Neat PG counseling. The doctors’ strike at Safdarjung, RML, Lady Hardinge Medical College, GTB and Loknayak Hospital began at 9am. It is here that the Emergency Ward, OPD, refuses to perform duty from the General Ward to the Kovid Ward. Doctors staged a dharna at their respective hospitals. The hospital management imposed the duty of senior doctors, but on Friday, when Amar Ujala’s team visited Safdarjung and RML hospital, no patients were treated there. The stretchers were lying empty and patients and attendants were waiting outside.

Doctors said the protest would continue until a counseling date was announced for the strike, which is being organized by the Federation of Resident Doctors Association (FORDA). Until the evening, his meetings with resident doctors of other hospitals in Delhi also continued. The doctors’ strike is likely to intensify from next Monday and other hospitals in Delhi are also expected to join the strike.

The form is not even made in RML
Mohammad Nafeez, a welcome resident in Delhi, was rushed to RML Hospital with his son. A part of Nafeez’s body was completely destroyed by Faliz’s hands. The counter for OPD is closed, so it is not possible to create a patient form. RML Hospital, on the other hand, said OPD was running in their place. At the same hospital, Farida, a Khazuri, came to the RML to pick up the date of the operation, but the doctors returned her. She was hospitalized for almost an hour and had to return home.

GTB hospital impact is low
The effect of the physicians at the GTB hospital here was minimal. Senior doctors are employed here in OPD. At the same time resident doctors were deployed on the hospital premises. However, its effect was most pronounced in OPD in the orthopedic department. Patient congestion is also high as the number of doctors is low.

The Nursing Union was also supportive
The Safdarjung Hospital Nursing Union demanded that Neat Counseling be conducted as soon as possible in support of the doctors’ strike. Trade unions say the strike has made patients’ condition worse. Treatment is not available in major hospitals. It also kills patients. He said the government should give priority and meet the demand of doctors immediately. The union has also appealed to the health minister through social media.