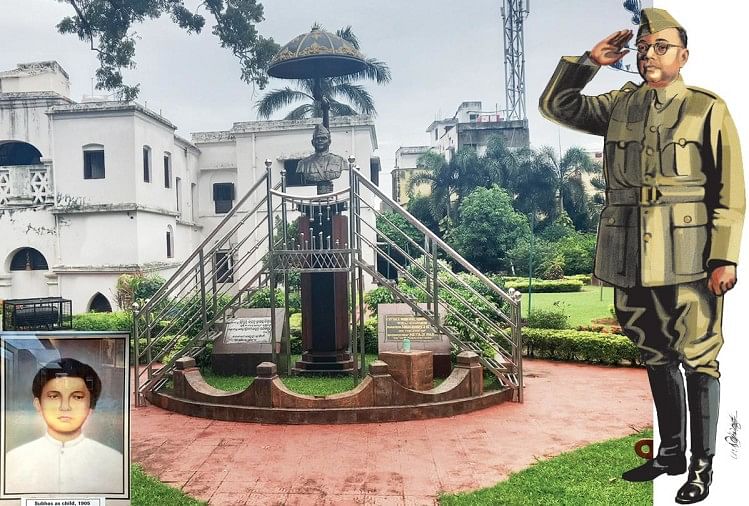 Walking towards the Oriya Market in the city on the banks of the Mahanadi, one is thrilled to see the birthplace of a freedom fighter coming face to face …

After the birth of his son, Jankinath Bose, a prominent lawyer in the country, wrote down his time and date in his diary. He wrote with an ordinary pen that the baby was born just after 12 noon on January 23, 1897. At the time of writing, he may not have anticipated that this ninth child would write a new chapter in history in the future. The baby was named Subhash Chandra Bose.

He was born in Cuttack, thirty kilometers from Bhubaneswar, the capital of Odisha. Cuttack has been the capital of Odisha for a long time and is still known as the main commercial center of the state. On his way from Bhubaneswar to Cuttack .. the man who took the country’s independence struggle to a new angle and challenged the British along with other world powers on foreign soil is now in his hometown .. does he remember? Is it customary to remember an event every year or is it something else.

One evening amid heavy rains, an attempt was made to learn about the memories of Netaji Subhash Chandra Bose while drenching the streets of Cuttack. When asked about Netaji’s birthplace, the young man, Suryakant Bohri, was sitting in a grocery store on Ice Factory Road, first in Oriya and then in somewhat weak Hindi. After this, pointing to a part of the road, he told me to get out of here, his birthplace was in Odia Bazaar.

Suryakant also said that due to rain, it may be difficult to go due to water turbulence. When asked what do you know about Netaji Subhash Chandra Bose, he said in his Hindi style that he does not know anyone. The whole of Cuttack reminds him. The sparkle in Suryakant’s eyes, even in the evening darkness, signifies the city’s admiration for Bose. After this, the cab driver Lovelin Dhar or someone standing in the street corner, Netaji and everyone who knew about the road leading to his house appeared.

As you walk towards the Oriya Market in the city on the banks of the Mahanadi, it is very exciting to think that the birthplace of the great warrior in the freedom struggle will come to you. As soon as you step inside from the outer gate of the Netaji Janmasthal Museum from Oriya Bazaar, pictures of Subhash’s life begin to appear on the walls. Prabhavati Devi comes after the house where she gave birth to her ninth child Subhash Chandra Bose.

As you enter a large gate, your desire to know more than what you have read about Subhash Chandra Bose intensifies. With a few minutes of formality and a nominal fee of ten rupees, you can see all the things associated with the life of Subhas Chandra Bose. Going into the courtyard of a two-storey house is like standing there, the screams echoing when Subhash Chandra Bose was born.

He must have walked on the platforms of that place in his childhood. The Junky Bhavan, his home, was converted by the government into the Netaji Janmasthan Museum in 2004. His statue was erected outside the house and to the right of the gate, the horse-drawn carriage was still kept, in which Bose sat. The various rooms in his house are divided into different blocks in the museum.

The Bose Study Room was set up in the first gallery. The chair-table and pen and pen kept in that room all belong to that period. All the items that were once used by Subhash Chandra Bose or his father Jankinath Bose. His father chose Cuttack for his law and began practicing there. He is also the mayor of Cuttack. As you progress through the various blocks, you get acquainted with the life of Bose.

Many pictures of Bose with his family from his childhood are kept in the gallery here. The special thing is that the order of each block is also tied to their order of life. Subhash, who climbed trees with his friends during his childhood, along with family photos, also appears in many films. In the same room, a diary page written by his father about Subhash’s birthday was also framed. Informing about the teachers in school life, Subhash was also informed about their impact on life.

The room where Subhash Chandra Bose was born comes when you climb a few stairs. You can only see inside the room through the window, you cannot go inside. In the upstairs room, furniture and utensils from his time are kept safe. His lounge is also decorated here with his favorite books. The position of the Bhagavad Gita is prominent in this.

The first three rooms on the second floor depict his revolutionary life during the rest of the day except for things related to his early life. Along with his commander’s uniform, the Jhansi Regiment uniform of the Azad Hind Fauj was also kept. In addition, their badges are kept safe. While wandering here, you will be introduced to his military life in the films itself.

Along with Azad Hind Fauj, Subhash blew the trumpet of the freedom struggle, so much space was given in the museum for this part of his life. There is also a library at the top of the house. This is a great place to spend time between books when you’ve tired. Library Assistant Lakhindhar Nayak welcomed you with a smile. Netaji Janmasthal Museum Trust in-charge Jailendra Prasad Roy said that about 15,000 people visit the museum every year.

Netaji took the freedom struggle to a new level and challenged the British along with other world powers on foreign soil. Netaji also had a penchant for spirituality … Ramakrishna Paramahamsa followers established the Ramakrishna Kutir in Cuttack. Subhash Ravensha donates his pocket money to students living in the cottage while studying at the college.