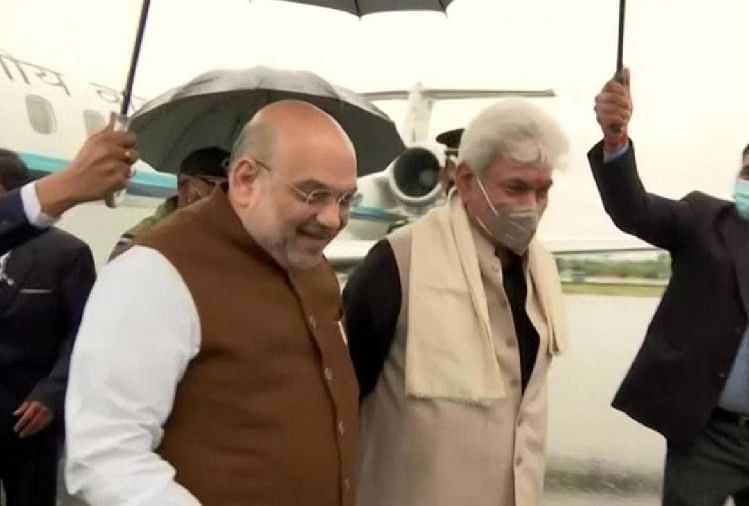 Union Home Minister Amit Shah is visiting the Kashmir Valley for the first time since the repeal of Article 370. Speculations are rife in political circles as to whether elections will be held in Jammu and Kashmir early next year.

Now what is on Amit Shah’s agenda?
Amit Shah’s visit to Jammu and Kashmir is the second high-profile political event since June, when Prime Minister Narendra Modi invited a delegation of political leaders, including Farooq Abdullah, Omar Abdullah and Mehbooba Mufti, to New Delhi.

The journey between terrorist events

Coincidentally, his visit comes at a time when terrorism in the state has risen sharply over the past few days, killing many migrant workers. Indian Army Chief MM Narwane visited the Kashmir Valley earlier this week, after which security forces launched a full-scale operation against the militants.

The Indian Army conducted an extensive search operation in the Poonch-Rajouri area of ​​Jammu and Kashmir. Nine jawans, including two junior commissioned officers (JCOs), were martyred in an encounter with militants in densely forested areas. However, reports suggest that despite the use of drones, security forces fear that many terrorists are still hiding. It is reported that terrorists have been hiding in the area for almost two months.

High level meeting on security arrangements
Earlier this year, the Union Home Ministry told Parliament that the number of terrorist incidents in 2020 had dropped by 59 per cent compared to 2019. And decreased by 32 percent until June 2021 compared to the same period in 2020. However, after the month of September, there was a sudden increase in terrorist incidents in Jammu and Kashmir. The National Investigation Agency (NIA) has so far arrested 13 terrorist associates for uncovering a conspiracy hatched by various terrorist groups to carry out attacks inside and outside the Union Territory. In view of these events, a high-level meeting was held at the Shah Raj Bhavan on the security situation in Jammu and Kashmir.

Its relationship with the Taliban

Security experts are linking the rise in terrorism in Jammu and Kashmir to the transfer of power in Afghanistan. The Taliban seized power on August 15. Security experts believe that with the arrival of the Taliban, unrest has broken out again in the Kashmir Valley. Experts fear this because the Taliban claim that they too have the “right to speak for Muslim Kashmiris”.

Major General AK Sivach (retd), a defense expert, believes that Pakistan seems to have won since the Taliban invaded Afghanistan. At present, all terrorist activities in Kashmir are being carried out on the orders of Pakistan. Tens of thousands of militants from Jaish-e-Mohammed and Lashkar-e-Taiba are fighting to seize Kabul. They are now in POK. Their plan is to infiltrate India in the winter.

Diplomatic victory of the Modi government
Recently, a Memorandum of Understanding (MoU) was signed between Jammu and Kashmir and Dubai for infrastructure development in Jammu and Kashmir. The Memorandum of Understanding (MoU) between Dubai and other Islamic countries aimed at undermining India’s policy on India’s Kashmir policy is considered a significant diplomatic achievement by the Modi government. At the same time, the Dubai-Kashmir agreement weakens Pakistan’s anti-India propaganda and isolates Pakistan.

Amit Shah will spend three days in Jammu and Kashmir, where he will review the implementation of various government programs and meet senior officials. In addition, he has a program to interact with Kashmiri Pandits, members of civil society and the youth of Srinagar. Shah is also reported to be addressing panchayat members and Bharatiya Janata Party activists.

After an all-party meeting with 14 leaders of Jammu and Kashmir on June 24 this year, Prime Minister Narendra Modi suggested that assembly elections be held soon in the Union Territory. He said the delimitation should be completed expeditiously so that an elected government can be formed.

This has led to speculation that the Modi government may hold assembly elections in Uttar Pradesh, Uttarakhand, Punjab, Manipur and Goa as well as Jammu and Kashmir. In this context, the political significance of Amit Shah’s visit has increased. However, he said the local political party had not been called for a debate on the issue as the government did not want to stir up the election debate in the wake of unrest in the state.

Most programs related to election readiness?
A local journalist from the Valley said- BJP activists are also watching Shah’s visit with the elections because he is going to be here for three days and see his list of programs rather than a review meeting of security arrangements at this time. .Most of the other programs seem to be related to election preparations. Here party leaders and activists are also engaged in election arrangements.

There was almost no public movement in the Kashmir Valley to protest the repeal of Article 370 from Kashmir but former Chief Minister Farooq Abdullah, his son Omar Abdullah (National Conference) and several politicians from the People’s Democratic Party (PDP) were placed under house arrest. It was only after the release of these politicians that seven regional parties came together to form the main front, the People’s Alliance for Goopkar Declaration (PAGD), against the BJP. The Gupkar alliance also contested the District Development Council elections.

Now what is on Amit Shah’s agenda?

Login or register to read more

Amar Ujala Premium Articles are only available to registered readers