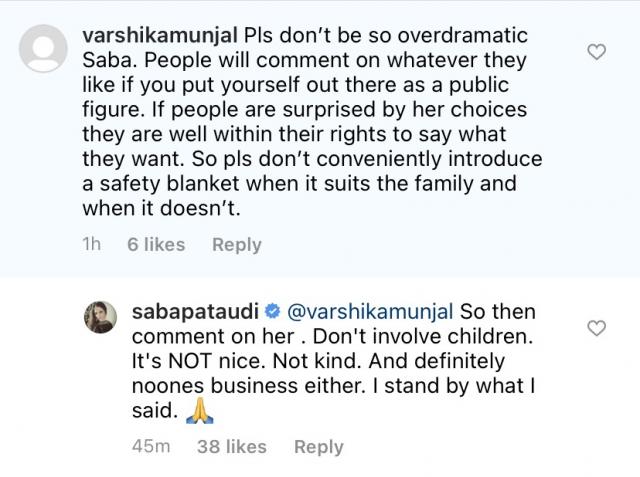 Saba Ali Khan on Thursday defended Saif Ali Khan and Kareena Kapoor’s younger son, Jahangir Ali Khan, against trolling in his name. She said in an Instagram post that only parents have the right to decide the name of their child, and everyone should respect that. However, one person found her comments “extremely sensational” and said public figures should be open to scrutiny.

Commenting on Saba’s post, one Instagram user wrote, “Please don’t be over-dramatic Saba. People will comment on what they like if you present yourself as a public figure. If people are surprised by her choices, they are entitled to say whatever they want. So please don’t get involved. Conveniently secure blanket when it fits the family and when it doesn’t.”

In response to the comment, Saba stood by her position and said that while people are invited to criticize Kareena, children are prohibited from them. “So comment on it. Don’t involve the kids. It’s not nice. Not nice. And certainly nobody’s business. She wrote. Saba is Saif’s sister, and Jahangir is her nephew.”

Saba, in her original Instagram post, shared a bouncing photo of Kareena and Jehangir from a family vacation in the Maldives. “When a mother holds her child inside her and gives him or her her life… only she and the father… have the right to decide… who, how and what the child will grow… and the name,” he wrote. +

Read also | Saba Ali Khan opens up to Kareena Kapoor and Saif Ali Khan naming their son Jahangir: ‘Nobody else has an opinion’

“No one…no one else, including other family members, who might gladly suggest, have an opinion. Over anything! It’s her spirit that nurtured that child. Only parents have rights. I think it’s a reminder to everyone.” Respectfully that. Today tomorrow. For life!!!” She added. She also sent love to her children and baby J.

Saif and Kareena have been criticized for naming their youngest son, Jahangir. They were in the midst of a similar controversy in 2016 when people provoked them to name their eldest son, Taimur.