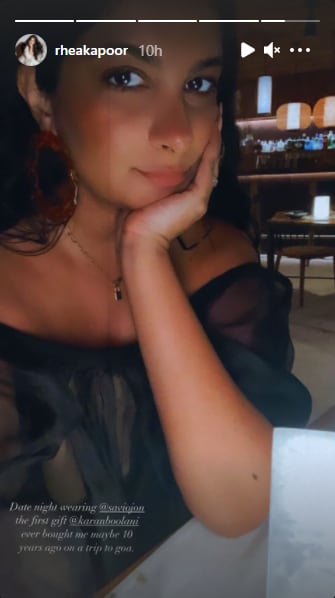 Producer Rhea Kapoor gave a glimpse of her date with her husband Karan Polani in the Maldives, where they are currently on their honeymoon. Turning to her Instagram Stories, Rhea also gave a sneak peek at the first gift she received from Karan.

In the photo, Rhea Kapoor wore an off-the-shoulder black dress with large earrings and a chain around her neck. She posted a selfie from inside a restaurant with her face on her hand. She captioned the photo, “Date night wearing @saviojon. First gift @Karanboolani bought me maybe 10 years ago on a trip to Goa.”

Rhea tied the knot with her longtime boyfriend Karan Polani on August 14 at the home of her father, actor Anil Kapoor, in a simple ceremony. Two days later, her family organized a star-studded wedding for the couple. The festivities were attended by Arjun Kapoor, Jhanvi Kapoor, Khushi Kapoor, Shanaya Kapoor, Sanjay Kapoor, Maheep Kapoor and other family members.

Earlier this month, Rhea and Karan flew to the Maldives for their honeymoon. On Instagram, she shared a photo of herself lying in a pool wearing a chestnut bikini. Karan also appeared in it but in the background. On the post, she had written, “I left the kids at Nani’s house.”

A few days after her wedding, Rhea shared the photo of the couple on Instagram and wrote a note. She captioned the post, “After 12 years, I shouldn’t have been nervous or exhausted because you’re my best friend and best man ever. But I cried and shivered and my stomach turned all the way because I didn’t know how humbling the experience would be.”

“I’ll always be that girl who had to come home to Juhu at 11pm before my parents went to sleep. Until now I just didn’t know how lucky I was because I felt so torn. I hope we can make a family so close that we have so much and so much love in our lives.” Mine are Karanboolanianilskapoor @kapoor.sunitasonamkapoor and forever harshvarrdhankapoor,” she added.

Read also | Riya Kapoor lounges in the pool on her honeymoon in the Maldives, leaving fans baffled as she talks about ‘kids’

Rhea and Karan first met while producing Ayesha, her first production. He worked as an assistant director in the movie. She is the second of three children of Anil and Sunita Kapoor. Her siblings are actors Sonam Kapoor and Harsh Vardhan Kapoor. She is also the niece of director Boney Kapoor and co-produced films such as Khoobsurat and Veere Di Wedding.