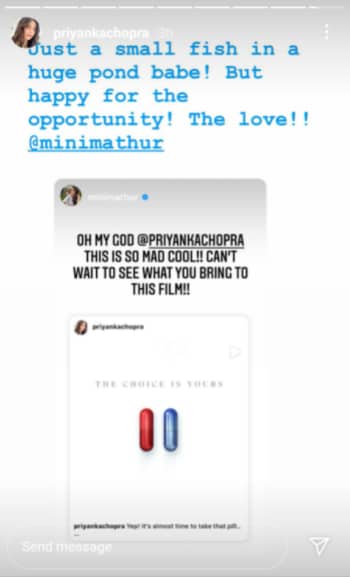 Actress Priyanka Chopra calls herself a ‘little fish in a huge pond’ in her upcoming movie The Matrix Resurrections. Taking to Instagram, Priyanka shared the release date of the movie’s trailer as well as a link to the teaser.

Priyanka Chopra captioned the post, “Yes! It’s almost time to take this pill… Promo Thursday 6AM PT (6:30PM PDT). Go ahead and click the link in my bio to try it out for yourself. The choice is yours. MustafaHosny Oh God, Amen.

Actress and TV presenter Minnie Mathur shared her Instagram Stories post, writing, “Oh my Godpriyankachopra. This is so cool!! I can’t wait to see what you’re getting for this movie!!” Reposting her Instagram Stories, Priyanka replied, “Just a little fish in a huge luscious pond! But I’m so happy for the opportunity! Love!! minimathur.”

The first look at the characters has been revealed in an innovative way on the interactive website WhatIsTheMatrix.com. Users were welcomed to choose between the blue pill and the red pill. Each option users choose offered different angles of what appeared to be the central story in The Matrix Resurrections. Each time the user clicks on a bead, the shots change slightly. The trailer will be released on September 9.

The fourth film in the Matrix franchise, directed by Lana Wachowski, is scheduled to be released on December 22 in theaters and on HBO max. Lana co-directed and co-wrote the first three installments of the Matrix with her sister Lilly Wachowski.

Meanwhile, Priyanka will also appear in Text For You, along with Celine Dion and Sam Heughan. She was also filming her next series, Citadel, in London.

Apart from that, she will appear in the recently announced Bollywood movie Jee Le Zaraa along with Alia Bhatt and Katrina Kaif, which will mark Farhan Akhtar’s return to the trend.