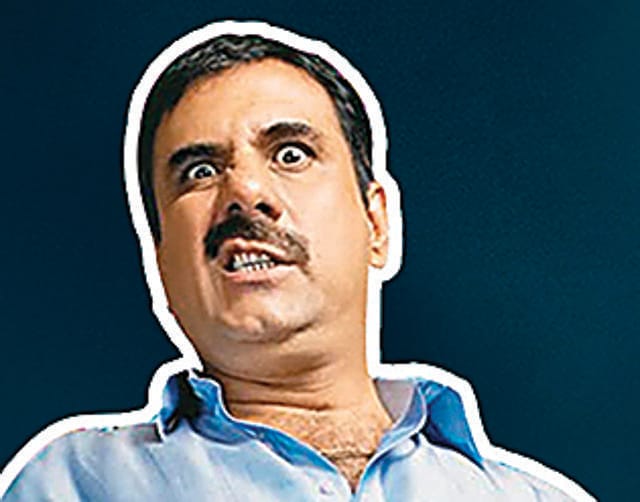 This movie has a very special place in my heart. I believe in acting in a Punjabi role. I felt wrong. Jaideep Sahni (writer) wanted me to act but playing that role was not something that would interest me so much. Today, I thank him for putting his trust in me. He was persistent and I was convinced. I prepared by meeting with property dealers and chatting with them. You can get the physique, the accent and the body language right but the purpose of the character is very important. I worked on it. I believe in acting in a Punjabi role. Dibakar Banerjee and Jaideep caught me by the dubbing process, which stopped the film a year after the shooting was over. Anupam Kher Saab is a huge support system as an actor. When an actor with your stature enjoys your acting, it makes a lot of difference. His support is very important. When we first saw the movie, he was excited about my entry, which was unbelievable. I will always be indebted to Kher Saab for his love and support. This movie helped people to cast me in roles without being afraid outside of my comfort zone. It had a huge impact on my career.

I started at that point and am auditioning a lot. Dibakar made a very difficult decision to cast me, but he trusted me with that role. I know Lounda playing Punjabi, Delhi very well. I remember reading the script and thinking about how accurate it was. This is impeccable. This credit goes to Anupam Kher who led the cast in all ways. He inspired and entertained us. I made a great friendship with him. Waiting for the release was frustrating, especially since this movie is important for my career. I know people like it. The actors meet and talk about the release and say ‘Kismet Dekho, Aachi Film Stock High’. KGK and Pyar Kay Side Effects were released within a week and both were huge hits. That week put me on the map as an actor. I remember, I first appeared on screen when my butt crack was shown! My goal is to do justice to the line.

The simplicity of the script impressed me. This is not your regular movie. I remember meeting Dibakar for this role, but he worked as a director for the first time and I want to audition soon. I said to him, ‘Do you want a good audition or a quick audition?’ I came the next day and improved the scenes in the movie and when I was done, he gave me that role. The film ran into obstacles, but was a hit when it was released. Anupam Kher kept the unit together and uplifted our souls. The release delay has affected all of us. People thought that no one would buy a movie that was not like that. There was a legal issue regarding the rights, producer Savita Mathur acted well. The song Chuck De Fate became a huge hit. People loved the movie. It increased due to word of mouth. Whoever saw it, loved it.

This image is suitable for people of all ages. This has created awareness of loopholes when dealing with property. It is a timeless film that is still alive. I often get messages about the movie from audiences around the world. This is a well written script that has become a cult classic. It doesn’t look like 15 years but yesterday we were shooting for it. We made wonderful friends. Since this is a small budget movie, we all shared a vanity van and played many games. We live the movie in many ways. Anupam ji leads a game of something. The created image made me aware of the loopholes in the deals and I am happy that people did not give it up.